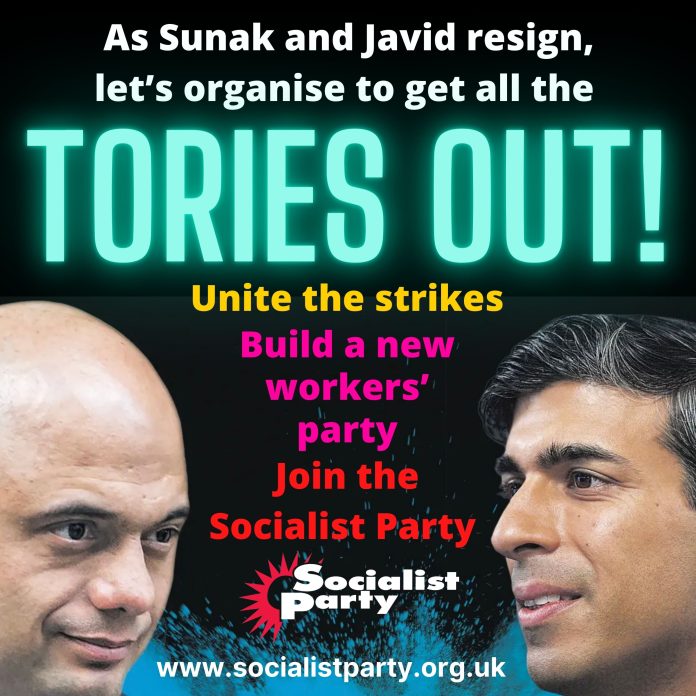 When will Boris go? That’s the question on many minds after the resignation of millionaire Tory chancellor Rishi Sunak and millionaire Tory health secretary Sajid Javid from Johnson’s government.

These resignations, and the others who follow, were triggered by the latest government scandal. Johnson was forced to eventually admit, having initially denied it, that he knew of allegations of abuse against deputy whip Chris Pincher at the time of his appointment.

It is less than a fortnight since the Tories suffered the biggest numerical majority ever overturned in a byelection in the Devon seat of Tiverton and Honiton – and lost in Wakefield on the same day.

These were ultimately protest votes against Johnson and the suffering his government is bringing to the lives of millions. The context is a cost-of-living crisis that means a third of primary school children are regularly going to school without eating breakfast.

When placards outside the parliament of one of the richest economies on the planet read “we can’t afford to live”, workers can’t afford to tolerate the government any longer. The byelections gave a small chance to protest.

The fear that those gigantic byelection losses could translate into the looming general election is the motivation behind this latest cabinet drama, part of the moves by Tories who fear Johnson’s leadership will doom them to defeat.

A general election must take place before December 2024 – but who will lead the Tories into it is far from clear. Their party is divided, and facing a major problem: they defend a system in which workers get poorer while Britain’s big business bosses are in clover.

Unite the Union’s new report highlights that profit margins for the UK’s biggest listed companies (FTSE 350) were 73% higher than pre-pandemic levels in 2019.

Increasingly, it is the trade union movement, moving on to the front foot through a growing strike wave against the cost-of-living crisis, that is providing leadership and winning support from workers and sections of the middle class.

The RMT’s historic national rail strike has revealed the massive potential power of working-class collective action. It has opened the floodgates to wider sections of workers organising, preparing, and fighting for their own action.

Bringing together the growing number of disputes in both the private and public sector is what’s needed.

The National Shop Stewards Network is calling for a rally and lobby at this year’s TUC congress in September, where the leaders of the six million-strong trade union movement meet.

There is enormous potential for mass joint action now, as workers across all sectors are struggling against spiralling price rises while real wages fall. If necessary, the most fighting unions should take the lead.

As we enter this new period of struggle between the classes, workers also need to organise on the political front. Mick Lynch, RMT general secretary, correctly said at the Trades Union Congress demo on 18 June, pointing at parliament: “You’ve got to pick which side you’re on and you either get up and fight with us or you get out of the way”.

Keir Starmer’s leadership is clear which side Labour is on – and will be on if in government. David Lammy said: “A serious party of government does not join picket lines”. But picket lines are the line between the bosses who want workers to pay for the crisis while their profits soar, and the workers forced to fight back.

So with Labour not on our side of the line, where does that leave workers fighting in the workplaces and communities when the general election comes? The need for a new mass workers’ party is clear.

The Socialist Party supports the call by the Trade Unionist and Socialist Coalition (TUSC) for those in a position to act to take decisive steps towards solving the problem of working-class political representation – the trade union leaders or potentially Jeremy Corbyn if he stands independently.

The Socialist Party will continue to do everything we can to make this necessity for our class a reality. But if, as is possible, such steps have not been taken in time for the general election, a TUSC challenge would be necessary.

As an insurance against a general election situation where workers have no voice on the ballot paper, the TUSC steering committee has already agreed a target of 100 ‘no cuts’, working-class fighter candidates.

Part of building a new workers’ party which can end the poverty and suffering of capitalism, means fighting for a programme that includes a democratic socialist plan of production based on the interests of the overwhelming majority of people, not the millionaires, and in a way that safeguards the environment.

Strike together: National Shop Stewards Network lobby of the TUC

The NSSN has produced this model motion:

This (union branch/trades council) gives our full support to workers being forced to take strike action against their employers backed by the Tory government. The cost of living crisis, fire and rehire tactics and other attacks by employers in pursuit of maintaining profits at our expense all mean workers are uniting to fight back.

We will continue to give our solidarity, building practical and financial support to all striking workers. The increasing number of disputes shows the immense power of workers. If unions act together, significant victories can be won. We also oppose the Tories’ threats to introduce further anti-union legislation to the raft of undemocratic restrictions already in existence and call on the TUC to coordinate opposition.

We call on unions in struggle to urgently come together to discuss and formulate a strategy to coordinate industrial action ballots and strikes.

We therefore agree to build the National Shop Stewards Network (NSSN) rally and lobby of TUC Congress in Brighton on Sunday 11 September behind this call.