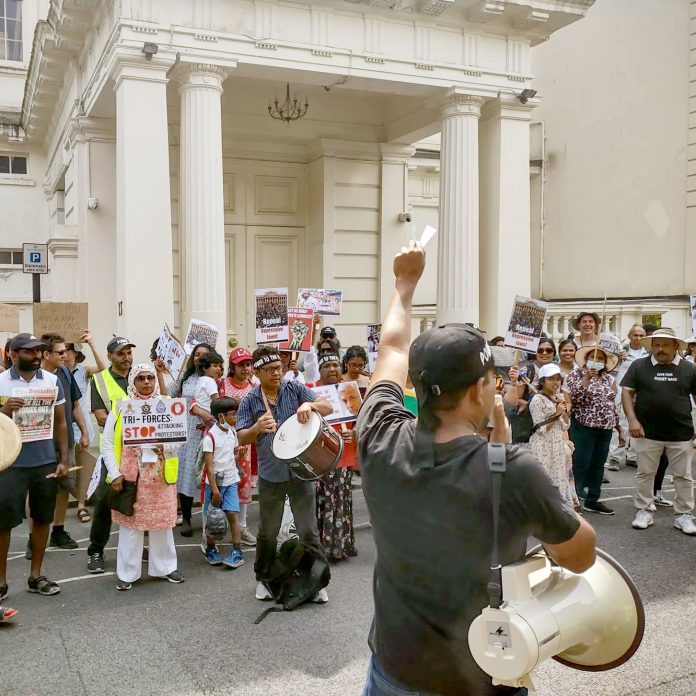 A mass movement and strikes have forced out the Sri Lankan President, Gotabaya Rajapaksa. As the Socialist goes to press, a state of emergency has been declared while MPs decide the next president. James Ivens, Socialist Party national committee member, spoke at a solidarity protest in London on 17 July. We print edited extracts of his speech.

It is the ruinous policies of the capitalist elite in Sri Lanka that have led to the food crisis. We say: nationalise the large land holdings and allow the small farmers, according to a democratic plan, to produce the food that the people of Sri Lanka need.

It is the ruinous policies of the capitalist elite that have caused the debt crisis. We say: repudiate that debt, refuse to pay the IMF. And instead, nationalise the banks and the finance sector, and use those resources democratically to plan to provide public services for all.

There is this question of who is going to come to power next. MPs are selecting the next president. But all of the institutions which have allowed the Rajapaksas and their friends in the capitalist elite to rob the people of Sri Lanka, are waiting in the wings.

Those who represent the capitalists, should not be allowed to hold power. Instead, those committees that have already started to spring up, in order to lead the demonstrations and protests, should be replicated in every local area: in the farms, in the factories, in the offices, in every neighbourhood – elected by ordinary working people and the poor, and subject to recall. Those committees should convene a revolutionary constituent assembly.

Behind me there is this slogan: “a new peoples’ constitution now”. We know the people of Sri Lanka are crying out for system change. The Socialist Party says that system change should be socialist change. Nationalise the commanding heights of the economy, for a democratic plan by the working class and the poor, to immediately implement emergency economic programmes to feed the people and to stop the Rajapaksas and their echoes around the world from keeping power.

Another speaker earlier today correctly said: ‘The best thing that workers in Britain can do in solidarity with this movement, is to bring down our own Tory government, which is a friend of the rich and the robbers around the world’.

And the Socialist Party says: there are strikes building in this country, why not all strike together in the autumn? And not just the rail workers, but the postal workers, the teachers, the civil servants and all those workers striking against the cost-of-living crisis in this country too. And for the trade unions to put together a new mass party of the working class, which can fight for socialism, in Britain, in Sri Lanka and around the world.