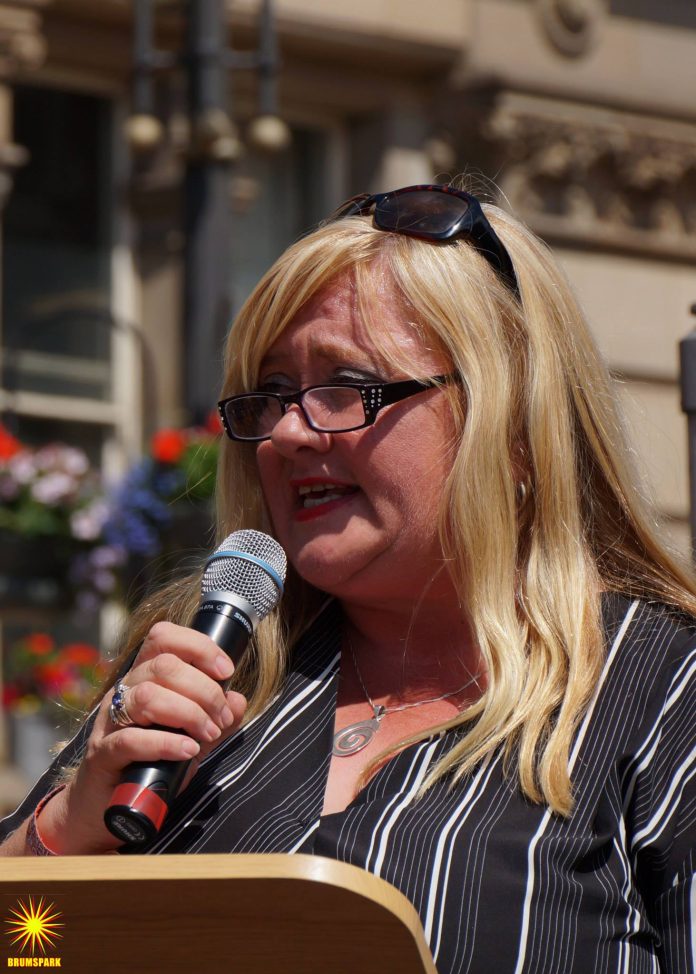 Sian Ruddick’s death on the afternoon of Wednesday 13 July came as a profound shock to her many friends and comrades.

A long-time member of the Socialist Party, and widely respected activist in the PCS union, Sian had experienced ill health, including heart surgery last year. She appeared to have made a good recovery, but sadly this did not last.

Sian’s long and distinguished record started in the CPSA days – a PCS predecessor union – and the fight against its state-connected right-wing leadership.

A union rep in her local office in Handsworth in Birmingham in the early 1980s, it wasn’t long before she became branch secretary. It was remarked of Sian that she enjoyed the respect and affection of her members, and the respect and fear of local management.

Sian held many union positions over the years: Midlands regional committee chair, chief teller at the union’s annual conference, and member of the DHSS (now Department for Work and Pensions) executive committee, to which she was first elected in the late 1980s. Sian was active on the union’s national disability forum and a delegate to the Trades Union Congress.

As a member of the Socialist Party, and our predecessor organisation Militant, Sian played a prominent role in building the left in the union. She could always be relied on to persuade her branch to support left candidates.

Sian was a Left Unity auditor in 2018 when PCS general secretary Mark Serwotka led an attack within Left Unity on Chris Baugh, the incumbent assistant general secretary, who was up for re-election. Despite strong friendships with some activists who supported Serwotka, Sian never wavered in her loyalty and political commitment to the Socialist Party.

She supported Chris in the election, and helped form the Broad Left Network, a socialist rank-and-file group developed as a consequence of the Left Unity leadership’s refusal to back Chris Baugh, the LU-nominated candidate.

The vitality of Sian, and the joy she brought to the lives of those who knew her, is impossible to adequately convey. There have been many memories of Sian shared after the news of her death. A couple help fill out the picture by recollecting sharing a 24-hour picket of Birmingham airport during the 1981 pay dispute, and sharing a house with Sian and fighting off the poll-tax bailiffs.

And also, from a lifetime friend, and political and Northern Soulmate comes a message we can all identify with. “Sian – RIP comrade, friend and soul sister.”

Sian was never phased by weight of our union work

I first met Sian through my wife as they were at school together. I got to know Sian socially at various dances and parties. She loved a drink and a dance, as we all did.

Sian attended our wedding in 1981; at the point I had just joined Militant – predecessor of the Socialist Party. Sian joined Militant a little later, and became active with us as we built a Bromsgrove party branch of 16.

Sian joined us in the Labour Party, and on Labour Party Young Socialist activity, including being part of a 32-strong Broad Left that took on the right wing. She was active with us during the miners’ strike 1984-85.

In the period I became consciously more active in the Association of Magisterial Officers (AMO), Sian was at work in CPSA (predecessor of PCS) Department for Work and Pensions. We shared our experiences and knowledge.

Sian had a phenomenal grasp of the detail involved in casework, disputes, fighting the right wing in CPSA, and the periodic controversies in Left Unity and with others on the left. I would occasionally glaze over with the weight of it all, but the point was, Sian always had something important to say.

The benefit of those conversations came through when AMO merged with PCS. Sian was vitally important in my union education and I will always be grateful.

Sian’s passing is a terrible shock for all of her friends and comrades. I am happy to know that one of the last things she did was travel to Benidorm for a Northern Soul music event. Sian was as much a fixture on that scene, as she was in the Socialist Party and PCS. She will be missed and always loved.