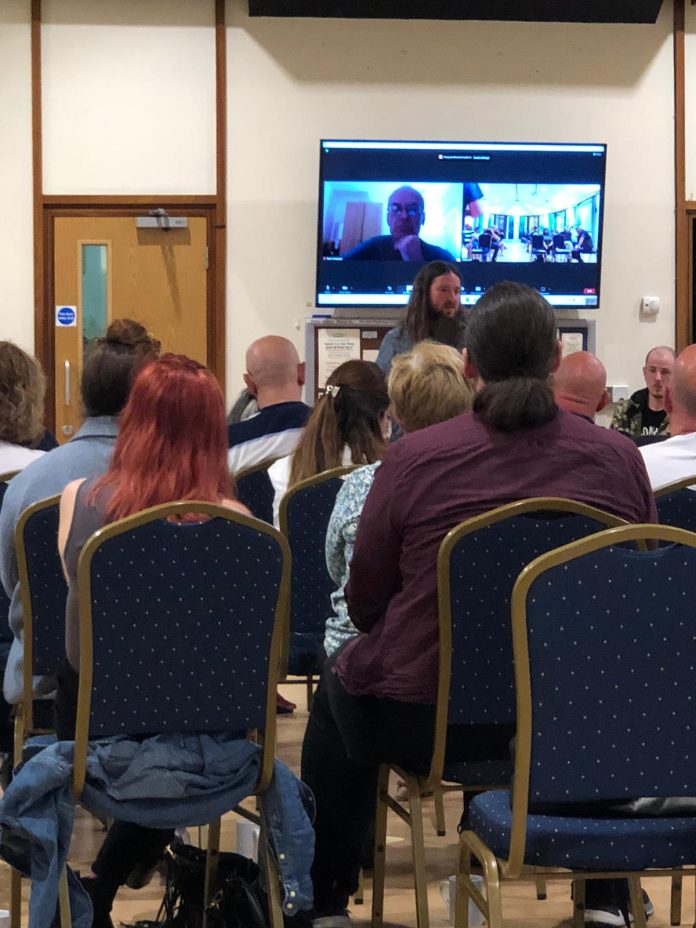 Over 30 people attended a public meeting organised by Devon Socialist Party in Torquay on 28 July. They gathered to express their anger at the cost-of-living crisis and support workers taking strike action for inflation-beating wage increases.

Lee Rundle, a bus driver from the RMT union, speaking in a personal capacity, opened the meeting with an inspiring contribution about the struggle of fellow rail workers and how their fight is our fight. All workers need an inflation-beating pay rise, with no attacks on their terms and conditions. The Tory government wants to break the RMT to defeat workers everywhere. But together we can build support and solidarity for rail workers and all workers taking action for pay rises to survive the growing cost of living.

James Martin, a train driver from Aslef, also in a personal capacity, told us about their strike action. Train drivers, 95% of whom are members of Aslef, had voted overwhelmingly to strike to win a pay increase after suffering three years of no wage increases.

We also need to join the struggle to build a political alternative to the Tories and the red Tories of Sir Keir Starmer’s Labour Party. The Trade Unionist and Socialist Coalition (TUSC) will be standing in council elections and would aim to stand 100 candidates nationally in the next general election. He called on all present in the meeting to consider becoming a TUSC candidate to offer the people of Torbay and Devon a fighting, socialist alternative; and to join us in the Socialist Party to fight for a better, socialist world.

Many attending spoke about the difficulties they face because of the rising cost of living. Many ideas were discussed. A supporter of the ‘Don’t Pay Campaign’ explained how it is calling for a mass non-payment of energy bills by over a million people on 1 October, by cancelling their energy provider direct debits.

Everybody attending thought the meeting was a great success, bringing lots of new, like-minded people together to build support for workers, trade unions and socialist struggle in Torbay and Devon.

In all corners of the south west, a significant number of striking workers have embraced our slogans and general approach with enthusiasm. An RMT worker has joined us in Salisbury, while a young CWU BT worker on his first ever picket in Bristol asked us how he could become a member of the Socialist Party.

A really successful Socialist Party public meeting in Torquay (see above) around the issue of fighting back against the cost-of-living crisis, witnessed an ASLEF member standing up and ripping up his Labour Party card. The next day he applied to join us!

There’s a new mood of working-class resistance in the air. Whichever Tory clown gets the keys to Number Ten, their honeymoon will be cut very short by escalating trade union, social and community struggles.

On our local Socialist Party stall we had our best sale since before the pandemic. One young couple asked to shake my hand, saying the last couple of weeks have been a real education for them in learning about the power of working-class solidarity!