Councils do have a choice: 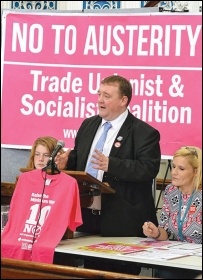 Members of unions Unite, Unison, PCS and RMT watched from the gallery on 25 March as Leicester City Council voted on its annual budget.

Since 2011 over £85 million has been cut from local services in Leicester. Mayor Sir Peter Soulsby's latest cuts budget was passed by the overwhelmingly Labour council.

The city council's Unison branch has publicly criticised the budget for 'disguising' cuts.

Gary Garner, Unison branch secretary, said: "Leicester City Council is hiding behind a policy of organisational change and reviews and carrying out, by stealth, the coalition government's programme of public sector cuts."

Having seen cuts to Sure Start centres, adventure playgrounds, elderly care homes, homeless provision and community centres alongside much more, it's difficult to think what there is left to go.

However, the Labour-controlled council has found a way, by raising council tax to the maximum threshold, just shy of triggering a referendum, and increasing rents.

Only two voices spoke out in the council against these proposals, the Trade Union and Socialist Coalition councillors Wayne Naylor and Barbara Potter.

They blasted the Labour council for passing on the cuts to working class people and proposed an alternative - a 'People's Budget'.

Instead of stashing away a further £6.9 million on top of the existing £49 million in reserves, why not spend that money now on maintaining jobs and services while launching a fight for the needed money from central government?

Wayne Naylor said: "You say you're saving the reserves for a rainy day. Well look around you - it's raining now! We need to save these services today before they're gone tomorrow." 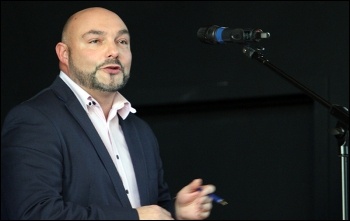 To cheers from campaigners in the gallery, Hull rebel councillor Dean Kirk moved a "no cuts" amendment to the ruling Labour group's budget proposals for the city. Dean pointed out that if the council drew on its reserves, then no cuts would need to be made.

Dean, a Red Labour councillor backed by TUSC, pointed out that if he was Steve Brady, the Labour Party council leader, he would be ashamed of himself for being praised by the class enemy - Tory local government minister Eric Pickles.

Pickles had previously praised Labour councils for implementing the cuts. His reward to those councils was to give them more cuts!

Brady showed how out of touch he is becoming by claiming that the people of Hull "like what he is doing". This sound bite has already caused a backlash from Labour activists who are more in touch with people's views. They fear that Labour's vote could be cut even more than last year, when Ukip emerged as a serious challenger in some traditional Labour wards.

Despite miserable weather, outside the council chamber a lobby of over 200 trade unionists and community activists was joined by a giant inflatable "scabby rat". The rat symbolised deteriorating cleanliness and hygiene linked to cuts the council have implemented.

The Labour leaders in Hull continue to put the blame for the cuts on the Tory government. But their excuses are increasingly pushed to one side because of party leaders Ed Miliband's and Ed Ball's determination to complete the Tory's dirty work if Labour wins the general election. More than ever, the need for a new workers' party is becoming accepted.

A Unite member on the lobby said that he was becoming more frustrated that Unite was supporting Labour while Labour was shafting Unite members. Many national trade union leaders continue to prop up Labour, but rank and file trade unionists in Hull are committed to campaign for Dean Kirk and TUSC candidates in Hull in the May elections.

In 2015 TUSC aims to stand 100 general and 1,000 council election candidates in the biggest socialist left-of-Labour election challenge for over 60 years.

It involves the RMT transport workers' union, leading members of other trade unions including the PCS, NUT and POA, as well as the Socialist Party and other left and anti-cuts groups and individuals.