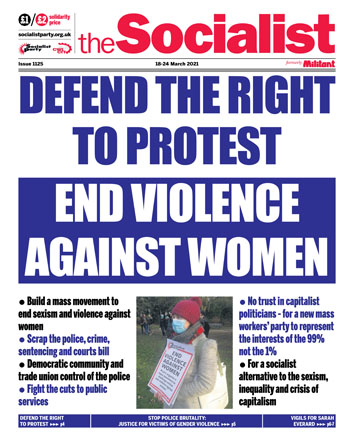 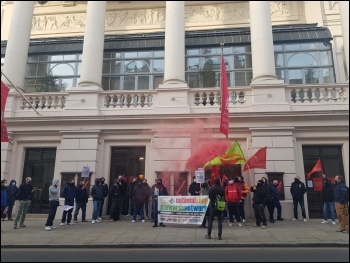 Following on from a protest in Swansea on 3 March, construction electricians in Unite the Union, supported by Cardiff Trades Union Council, protested outside the Cardiff offices of construction giant, NG Bailey.

They chanted "no deskilling, no ESO!" at the company, which is trying to force down wages and skill levels at the huge Hinkley Point nuclear power station construction site in Somerset, using electrical support operative (ESO) grades instead of fully-trained electricians.

"NG Bailey has decided to offer six to eight week courses to unskilled workers to try and do the basics of electricians work, the containment work which amounts to 60-70% of the work on the job. They will be giving those ESO workers a lower rate of pay than fully trained electricians.

"NG Bailey and Balfour Beatty are trying to cut their costs and increase their profits at electricians' expense. They're trying to make out that there's a skill shortage but if they advertised the job they'd have plenty of applicants from electricians in the Bristol, South West and South Wales area.

"It's a dead end for anyone roped into doing the work too: the six-week course doesn't lead on to further progression to becoming a fully qualified electrician. These companies should be taking on more proper apprentices instead of these gimmicks to try and undercut our wages.

"The danger is as well that work will be done unsafely, especially if this way of working spreads. The bosses' attitude is: 'It's only a nuclear power station. What could possibly go wrong?'"

Questions are being asked about why the Welsh government is allowing a company like NG Bailey to build expensive projects for the public sector in Wales. The Welsh Labour government claims to demand ethical employment practices from its contractors, yet both NG Bailey and Balfour Beatty get profitable contracts, no questions asked. The Welsh Government must stop handing out contracts to companies aggressively forcing down wages and skill levels.

The 'sparks' construction electricians have well and truly launched a nationwide struggle against deskilling. On 3 March, there were protests in London, Manchester, Swansea and outside Grangemouth.

The message to electrical contractors such as NG Baileys and Balfour Beatty is simple: take the electrical service operator deskilling grade off the table or expect more protests, walkouts and strikes.

The protest organised by the sparks started with workers protesting at the headquarters of NG Baileys and then marched to different construction sites - receiving support from the workers on site.

The Socialist Party has called for the closing of unsafe working sites and the stoppage of non-essential jobs.

The construction electricians took their struggle against deskilling to the 'belly of the beast' in the third week of action.

Workers protested outside the headquarters of Balfour Beatty in Canary Wharf against the bringing in of the ESO grade that would open the door to a huge percentage of electrical work being done by unskilled labour.

This would be used to shatter the pay and terms and conditions of electricians, boosting the profits of the bosses.

The sparks' campaign has already forced the suspension of the ESO course at Hinkley Point nuclear power station site. But workers are determined that it must be taken off the table totally.

If the likes of Balfour and NG Bailey don't guarantee this, the fight will be taken to the construction sites and protests will be turned into walkouts.