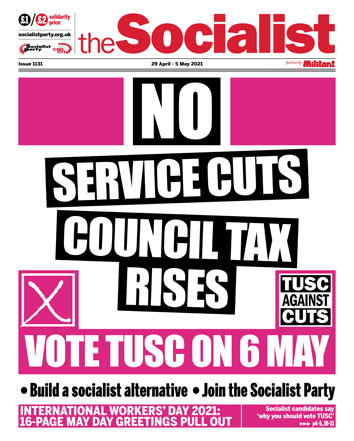 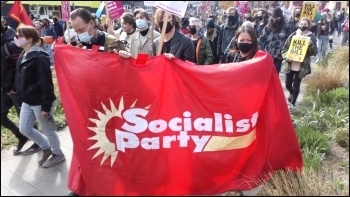 The past fortnight has been a perfect example of the power of protest. Football supporters gathering in their thousands outside stadiums defeated the plans for a money-grabbing European Super League barely two days after they were first made public.

The lessons of these demonstrations won't have been lost on the millions of working-class fans who agree with them. As former player Ian Wright put it, just imagine what could be achieved if the same energy went towards stamping out racism and inequality.

No wonder then that the Tories want to criminalise protest. The Police, Crime, Courts and Sentencing Bill could see football fans protesting against greedy owners, NHS workers marching for a living pay rise or women demanding an end to harassment jailed for up to ten years if they're judged to have caused "serious annoyance".

The police will have the power to impose times, routes and maximum noise levels on demonstrations. And if you're taking part in them as a striking worker, you'll have had to jump through hoops on ballot thresholds and picketing that form part of the most restrictive trade union laws in Europe.

It's not hard to see why the Tories are bringing in these new laws. The budget has promised a further £16 billion worth of cuts, below-inflation pay rises for key workers, and a phasing out of furlough and other measures which have so far prevented mass destitution on the back of the pandemic.

The ruling class want to make ordinary people pay for this crisis, but at the same time fear the uproar this could create. As the relief at the vaccine being rolled out and the better aspects of normal life returning turns to anger at job losses and 'fire and rehire', the Tories could face an enormous backlash.

However, this won't come from the Labour Party, which to begin with didn't even oppose the anti-protest bill. No wonder, when Keir Starmer's intention is to become a prime minister who acts in the interests of big business, and Labour councillors are repeatedly voting to cut public services.

That's why we need to build a new mass workers' party that backs protests rather than trying to ban them.

The Trade Unionist and Socialist Coalition is standing over 300 candidates on Thursday 6 May as a first step towards creating that political alternative.

If you agree, join us in building a socialist organisation that doesn't just fight for the right to protest, but for an end to the problems created by capitalism which we find ourselves protesting against.