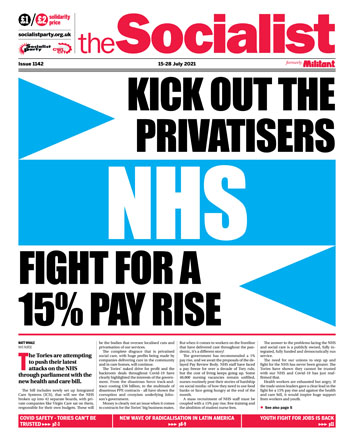 Bexley bin workers have started a two-week strike. Taking confidence from the recent victory of bin workers at Thurrock, another Tory-controlled council, workers are striking against private company Serco.

The refuse and cleaning contract has recently been retendered by Bexley council. But the workers' union Unite understands that Serco is the only bidder because the profit margins are so low. Bexley council plans to reduce the contract by £2.5 million over five years - a move that Unite warned could result in years of industrial unrest if staff bear the brunt.

The 140 Serco refuse and cleaning workers began striking from 25 July, with a picket line between 5am and 10am being held every weekday. Serco has failed for half a decade to include refuse and cleansing staff on a stipulated pay progression scale. The situation has led to instances of refuse truck drivers being on the same pay scale as street sweepers, with some staff being owed thousands in back wages.

Workers are also angry at the company's 2021 pay offer of 1.5%. Unite members have worked throughout successive national lockdowns to keep the service running, risking their own safety as well as that of their families.

Refuse staff in Bexley earn much less than their counterparts in other areas of the capital. For example, in neighbouring Greenwich refuse staff earn a minimum of £13 an hour, compared to £10.25 paid by Serco in Bexley, which is below even the London Living Wage.

We call for an end to privatisation in local government and across the public sector, and for all outsourced workers to be brought back in-house. 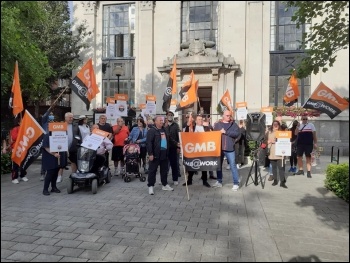 The rally in support of Gary Bolister, photo Rob Williams   (Click to enlarge)

Hundreds have signed a petition in defence council caretaker and GMB rep Gary Bolister who was dismissed after 24 years' service. Gary took part in a Facebook live video as part of a protest against Islington road closures in November last year.

During the clip Gary appeared in but did not film, an Islington councillor was inadvertently filmed in her home. The video was immediately stopped when the camera operator realised. Gary, who was mourning the loss of his father at the time, expressed full remorse - offering to write an apology to the councillor. Despite this - and despite 24 years of unblemished service - Islington Council sacked Gary and refused his appeal.

Workers protested outside the council offices in support of Gary on 8 July and were furious at the Labour-run council. They told Socialist Party members that they were angry union money is being paid to the Labour Party when it does this to GMB members and reps.

Unions have condemned a relaxation of safety rules restricting lorry drivers' working hours. Transport and distribution unions Unite and Usdaw said that the government's move would not address a shortage of heavy goods vehicle drivers, estimated at more than 75,000.

The decision is to 'allow' drivers temporarily to work shifts of ten hours rather than nine, plus up to two eleven-hour stints a week. Demanding better pay and conditions to attract new entrants, Unite national officer Adrian Jones said: "Asking an already exhausted workforce to work even longer is likely to make an already difficult situation worse.

"Unite will be advising its members not to place themselves in danger and that if they are too tired to drive safely they have a legal right to refuse to do so.

"Unite will fully support those who make that decision, legally and industrially."

Usdaw national officer Mark Todd said: "This short-term response to the much greater problem of driver shortages is not the answer.

"The government needs to make the industry more attractive through improving employment rights and ensuring higher pay for workers."

The NSSN would like to thank Solidarity Shouts for merging their planned meeting on Freeports into ours. They are supporting this meeting along with Southampton and South West Hampshire Trades Union Council and others.