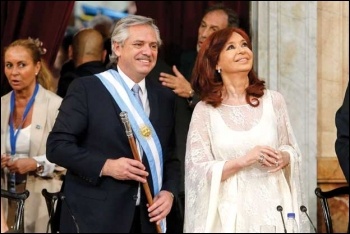 On 14 November, elections took place in Argentina in which the Peronist government led by President Alberto Fernández was the main loser. This was despite the big demonstrations the Peronists called, mobilising the trade union federations that they still control.

It was a big defeat for the government, under its banner, Frente de Todos. It barely won two of the eight provinces and lost in the main regions.

Against a background of deep economic crisis, sections of the population gave a victory to the Macrista right (supporters of the former right-wing president Mauricio Macri). The next two years will, in all likelihood, be very unstable for the government and for society as a whole.

The right-wing opposition emerged victorious in the three most important provinces of Argentina, under the parliamentary list of the Together for Change coalition, to which Macri belongs.

This has weakened Peronism, especially in the Senate, where it lost the majority it has held for 30 years.

Another novelty of these elections was the entry into Congress of the extreme-right Trans-Andean Congress. Far-right representation has not been seen since 1983 (when the military dictatorship fell). In Buenos Aires, a member of the party, 'Libertad Avanza' - Javier Milei a libertarian right-winger - won 17% of the first preferences.

Another important milestone in these parliamentary elections in Argentina was the leap forward by a coalition of the 'Trotskyist' left, FIT-Unidad, which managed to get four national deputies elected.

The left coalition won 1.3 million votes - a not inconsiderable vote for a radical left front.

This left front, which despite trailing the coalitions that came first and second, has become the third force at national level. It is challenged for this position by Milei's ultra-right, which shows how Argentine society is politically polarising.

The left now has four seats at the national level, two legislators for the city of Buenos Aires, two deputies for the third electoral district of the province of Buenos Aires, and several councillors in this same district.

In the province of Buenos Aires, it gained almost 600,000 votes (6.82%) for Nicolas Del Caño and Romina del Plá, as well as winning two provincial deputies (Guillermo Kane of the Workers' Party - PO, and Graciela Calderón of the Socialist Left -IS). Several councillors were picked up in urban municipalities, La Matanza, Merlo, Moreno and José Paz. This means that it made inroads into working-class districts.

For the first time in 20 years, the left has deputies from these districts to the National Congress. Myriam Bregman (PTS - Socialist Workers Party), obtained 7.76%, a little more than 141,000 votes, and Gabriel Solano (PO) and Alejandrina Barry also entered as deputies for the PTS. For his part, Luis Zamora of Self-Determination and Freedom also stood and won 3.07%. This means that the left, as a whole, won almost 11% of the votes in the capital.

To the above, we must add a triumph in Jujuy, where Alejandro Vilca, a garbage collector worker, an indigenous representative of the Colla people, and a militant of the PTS, was elected with 25% of the votes (more than 100,000 votes).

The FIT-Unidad has made important gains in the midst of a deep crisis in Argentina. It now is established as a significant political force, although quite far behind the larger coalitions.

If it turns towards the labour movement, participating in the different social struggles and with the prospect of strikes by workers, it can grow, and become a big factor in Argentina's politics.

New battles lie ahead. There will be a fight over an enormous and unpayable debt with the International Monetary Fund (IMF). The struggle will be to ensure that workers are not made to pay for the debt rather than those capitalists and speculators who have taken the money.

A reduction of pensions and wages of workers, attacks on the health budget, education and other basic rights of the working class are taking place.

Yet finance capital, landowners, and large economic groups continue to gain and accumulate millions. The result of this is already too evident - currently, 40% of the population are living below the poverty line.

This situation could be deepened with an agreement between the Argentine government and IMF, which points to new attacks against the working class.

The ruling class is already calling for 'realism' and the government blames former President Macri for the current situation. Yet it is still attempting to get an agreement with the right wing on how to implement the cuts, seeking the much-desired 'governability' to try to sustain attacks against the poor. This will increase the anger and popular discontent to an even greater level.

The Left Front Unity campaign focused on two central points: rejecting adjustment and submission to the IMF, along with fighting for a 30-hour working week (a six hour-day, five-day week), maintaining a salary equal to the family basket, along with gender rights and defence of the environment.

These policies gained support among sections of the population that are looking for an alternative to the current unjust system.

It remains to be seen how this struggle can be continued, how to organise employed and unemployed workers, and how to coordinate the struggles.

New struggles will take place and the FIT-Unidad will need to be able to reach out and win workers away from Peronism and offer a real alternative. This is the test it faces. It must take steps to initiate the building of a mass working-class party with a full socialist programme.

Peronism is a populist, nationalist political movement peculiar to Argentina. It draws inspiration from the presidencies of the late Juan Perón.

Perón was an army general who headed the labour ministry in the country's fascist-sympathising military dictatorship between 1943-46, where he embroiled the trade union tops into the state machine.

He was elected president in 1946, against the declared interests of US imperialism, and moulded his vision of a corporatist state with 'new deal' social reforms.

His nationalisations further antagonised US imperialism, although he later offered generous terms to US companies, and others, to attract inward investment. He also struck blows against Argentina's big bourgeoisie and landowners, and the conservative Catholic church hierarchy (the Pope excommunicated him).

This pro-worker and anti-imperialist stance bolstered his political reputation among sections of the working class.

Perón's radical reputation was further enhanced following his overthrow in 1955 by military chiefs, backed by the capitalist ruling class. In exile, he courted the revolutionary left - the Peronist youth movement, mistakenly and fatally, linked up with the urban guerrillaist Monteneros. However, he also maintained links with far-right and fascist groups.

To underscore the irreconcilable political movement Perón headed, on his return from exile in 1973, 3.5 million supporters greeted him. However, right-wing Peronists opened fire on left-wingers in the crowd killing at least 13 and injuring hunderds.

Perón went on to briefly become president again during a period of massive political instability in Argentina. During the internecine struggle between the left and right wings of Peronism, he led a brutal clampdown on the Monteneros and the left wing.

Perón died in 1974 and was succeeded by his third wife Isabel Perón, whose presidency was overthrown in 1976 by a brutal US-backed military coup d'etat.

Perónism, at its height, was a form of 'bourgeois bonapartism'; a regime where the machinery of the capitalist state temporarily elevates itself above the contending social classes in society, striking blows against one another, while ultimately representing the overall interests of capitalism.

Committee for a Workers' International (CWI)

The Committee for a Workers' International (CWI) is the international socialist organisation which the Socialist Party is affiliated to. The CWI is organised in many countries. We work to unite the working class and oppressed peoples against capitalism, and to fight for a socialist world.