Time to make a stand on pensions

Bolsover protesters win round one of toxic waste battle

Iraq - mobilise to withdraw the troops

THE ANTI-GLOBALISATION World Social Forum (WSF) met last week in Porto Alegre, Brazil. One of the highlights of the WSF was a rally addressed by Venezuela's radical populist president Hugo Chavez.

He is seen by many in Latin America as the figurehead of the struggle by the continent's workers and peasants against the capitalists 'neo-liberal' policies.

KEVIN SIMPSON of the Committee for a Workers' International (the socialist international organisation to which the Socialist Party is affiliated) reports from this electrifying meeting. 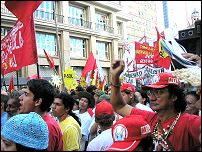 FROM FOUR hours before the rally, young people in their thousands streamed towards the Gigantinho ("little giant") stadium in the sweltering summer heat on 30 January.

The queue snaked as far as the eye could see, its progress designed to take advantage of any shade that existed along the way. And as the time progressed, the audience's expectation rose perceptibly.

For these thousands had come to hear Hugo Chavez, Venezuela's radical, populist president, speak of the rebellion against 'neo-liberalism' and US imperialism.

Unlike the Lula (Brazil's president) meeting earlier in the week, where his supporters were bussed in, all expenses paid, all those here came of their own volition and were overwhelmingly youth.

And talking to those who came to listen, you know that what the majority wanted to hear about was revolution - a radical alternative (but with no real clarity about how this is to be achieved) for the struggle against the brutality of capitalism in Latin America.

MANY OF these young people were Brazil's (and Latin America's) new generation of fighters for social change in the making.

They have broken with any illusions in Lula and capitalism; they are anti-capitalist and anti-war - as are many of their generation in other continents - but there is an important difference: they have come through the experience of what has been a continental-wide rebellion in the last few years against neo-liberalism.

In some Latin American countries this has stopped privatisation in its tracks and also entailed mass insurrectionary movements of the working class and poor peasantry.

And so they come into struggle not just brimming with confidence, energy and vitality but amongst an important section of them, a thirst for revolutionary and socialist ideas.

The Hugo Chavez meeting was perhaps the most significant at the WSF. It was sponsored by the CUT leadership (the heads of Brazil's corrupt and right-wing trade union federation) and the Movimento dos Trabalhadores Sem Terra (MST - the biggest of the landless organisations in Brazil. It still generally supports the Lula government while criticising some of its economic policies).

Clearly, the CUT leadership wanted to use the appearance of Chavez in an attempt to reverse the bitter hostility most trade union activists and radical young people view them with. This was why the leader of the CUT was scheduled to speak alongside Chavez, hoping that some of the Venezuelan president's authority would rub off. The governor of the State of Parana, Roberto Requiao (a Lula supporter), was also an invited speaker.

Members of the MST compered the event but it was clear that they took account of the character of the audience and were aware that some of the other speakers might get a hostile response. And so, from the time people began filing into their seats, the MST comperes led the way with revolutionary and socialist slogans.

The Gigantinho meeting represented, in microcosm, Brazilian politics today: a polarisation between those who still have some illusions in Lula (enthusiastically encouraged by the trade union leadership, the PT bureaucracy and the NGOs) and the bigger layers who feel absolutely betrayed by Lula and have been radicalised by recent developments in the continent.

By the time the auditorium was full, huge red flags were being waved in the air - a large PSOL contingent (see article opposite) took up the left bank of the stadium and led the way chanting anti-Lula and anti-imperialist slogans. And when the compere led the chant: "Brazil, Venezuela, Central America, a socialist fight is international" followed by: "Down with imperialism - Long live socialism", the audience erupted in a roar of approval and a series of Mexican waves swept through the crowd.

This response shows how in other parts of the world, the shadow left behind by the collapse of Stalinism within the mass of the population and the effect this had on political consciousness will begin to be swept aside as a result of the mass struggles that will develop against neo-liberalism.

The radical nature of most of the crowd became clear for everyone to see when a small group of Socialist Youth (the youth section of the Partido Comunista do Brazil - PCdoB - who are part of the PT government and are seen as Lula's political thought police) started chanting pro-Lula slogans and waving their party flags.

In literally seconds a seething anger and a bitter hostility filled the air as thousands of people shouted for them to be kicked out. The chant went up "pelego, pelego, pelego".

"Pelego" is a cushioned blanket put on horses' backs underneath the saddle to allow the animal to be controlled. It is used, allegorically, in the Brazilian workers' movement to describe the 'yellow' trade unions' role of being used by the bosses to control the working class.

A wall of sound greeted Chavez's arrival on the stage. But anger amongst the audience once again exploded as the president of the CUT, Luis Marinho, started to speak. The CUT is seen as being complicit with Lula of implementing major attacks on education and workers' rights through the trade union 'reform' legislation and the education 'reform'.

Marinho received no respite despite reminding those who were listening that the CUT was one of the only trade union federations who protested against the attempted coup against Chavez in 2002.

The only other time that the audience was almost completely united in chanting was after the PSOL delegation began to shout slogans against Lula's education and trade union 'reform' packages.

It seemed that Marinho finished his speech early and went back to the relative safety of his seat next to Chavez. Olivio Dutra, former governor of the state of Rio Grande Do Sul and now a minister in the Lula government, received only a little better treatment, largely because of his constant praise of Chavez. The governor of the State of Parana did not even attempt to address the audience.

The mood changed again completely when Chavez began to speak. Chavez is a charismatic figure and speaks with the authority of having mass support amongst most sections of workers, the urban poor, and the poor peasantry of Venezuela.

Therefore when he said during his speech: "I am not here as the president of Venezuela. I do not feel like the president. I am only president because of particular circumstances. I am Hugo Chavez and I am an activist as well as a revolutionary. Because to break the hegemony of capitalism and that of the oligarchs, the only way is revolution," the crowd roared their approval.

He also speaks in the language of the working class, with no fear about attacking US imperialism in front of an audience such as this.

However, Chavez typifies all populist politicians, bending to the mood before him and picking and mixing from many different forms of political ideology to present himself as 'all things to all people'.

During the first part of his speech he listed most of the leaders of anti-colonial/ anti-imperialist uprisings in the Latin American continent from those amongst the indigenous peoples in the 16th century to the Cuban revolutionary, Fidel Castro. He even repeated previous comments about Jesus Christ being the greatest revolutionary that ever lived.

He emphasised the fight of the southern continents against the 'rich north'. However, he did not raise this in the context of the struggle between the social classes internationally and quoted, favourably, the work of the 'non-aligned group of nations'* in the 1960s and 1970s as an example of what could be organised amongst the Latin American nations today.

During this part of his comments he quoted Chinese Stalinist, Mao Tse Tung, saying: "It is important in the struggle to know who your friends and who your enemies are."

Members of Socialismo Revolucionario (Brazilian section of the CWI) explained after the meeting that this was an implicit criticism of the audience for their response to the CUT leader. What is significant is that even Chavez was not prepared to explicitly make this criticism.

The latter part of Chavez's speech was perhaps his most radical yet to an audience of this kind. But any activist looking back at his comments will realise that while Ch‡vez made many valid points the radical parts of his speech appeared to sandwich the more dubious comments that he made.

His comments on the effect of the collapse of Stalinism (ie, the Soviet Union, the east European bloc of countries, and the satellite Soviet states in Africa and Asia) reflected what the CWI has said since the collapse of the Berlin wall in 1989.

Significantly, he then moved on to quote Leon Trotsky commenting that the coup against Chavez in 2002 illustrated the point made by this leader of the Russian Revolution that "every revolution needs the whip of counter-revolution". However, this is not the end of the question. Chavez has faced at least three serious attempts to overthrown him. These have been defeated by the masses. However, unless the revolution is taken forward and capitalism overthrown, through the adoption of revolutionary socialist policies, then the counter-revolution will strike again until it succeeds.

But he also spoke warmly of his close relationship with the rotten Chinese regime and the Libyan dictator Colonel Gadaffi, while he described autocratic Russian president Vladimir Putin as 'doing a good job in standing up to US imperialism'!

In one of the most significant parts of his speech he explained: "There are only two alternatives, capitalism and socialism. Capitalism can only be transformed via genuine socialism - a just and equal society. But this can only be achieved through democracy. But we have to clarify what we mean by democracy and it is not the type of democracy practised by Bush."

Chavez's final comments showed an attempt to use radical rhetoric to prepare the ground for making positive comments about Lula when he said: "There are people within my country. Good people. But people who say I don't go fast enough or that I am not sufficiently radical. But these comrades have to realise that this is a process, a process with phases and rhythms. Remember, we are taking on a world system which is a big task. I know that I am at risk of being booed but Lula is a good man and a friend of ours."

And Chavez was booed but this was partially drowned out by the applause he received as he ended his speech.

The most politically conscious activists who left the meeting would have noticed that there were more radical comments in Chavez's speech than usual. However, they would have also been aware that what was lacking was a genuine socialist and revolutionary explanation of how capitalism and imperialism can be defeated in Venezuela or throughout the continent.

Time to make a stand on pensions

Bolsover protesters win round one of toxic waste battle

Iraq - mobilise to withdraw the troops