"The majority of the British public is still not convinced that climate change is caused by humans", the Guardian reported on 22 June. In a certain sense, the majority are right - global warming is not caused by humans as a whole, but by big business, like BP.

If polling companies asked, "Do you think that big business pollutes the planet?" or "Are big business companies like BP putting short term profit before the long term interests of the planet?", most people are likely to answer "yes", particularly since the BP oil rig disaster in the Gulf of Mexico.

If BP can be forced to set up a $20 billion fund to pay compensation claims for the Gulf of Mexico disaster, why can't all the big oil and energy companies set up a fund to convert the world to carbon free energy sources, such as wind, solar, and wave power? They could, but they won't.

People become sceptical of government claims - and scientific claims - when the real perpetrators of the carbon dioxide (CO2) pollution which is threatening our planet try to pass the blame on to the hard working, under-paid and over-taxed population.

"Some people [were] saying politicians were not doing enough to tackle the problem, even though they were cynical about government attempts to impose regulations or raise taxes" the Guardian's environment editor, Juliette Jowit, has written. She finds this contradictory, but why should the working class pay for capitalist pollution? And when have government regulations imposed on big business been effective?

Sunspots have a greater warming effect on the earth's climate than previously thought, as some climate sceptics had argued, and over the last two or three years the sun has gone unusually quiet (What's Up Sunshine, New Scientist, 12 June 2010).

This may continue, having a cooling effect on the earth's climate, but no one yet knows whether it will overcome global warming, or for how long. Recently, sunspots have begun to reappear, and may return with renewed vigour, threatening to disrupt satellite communication systems. 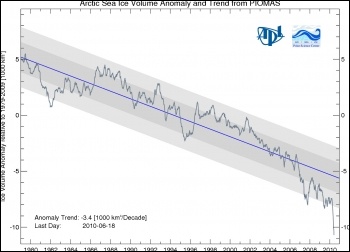 In the summer of 2009, the volume of ice in the arctic sea shrunk to the lowest on record, dropping precipitously (see chart). The winter arctic ice extended further than the record year of 2007, so climate sceptics claimed it was "returning to normal", but it was much thinner than usual.

The 'tipping point' in the arctic has been reached and has tipped. It has entered what the director of the National Snow and Ice Data Center called a "death spiral". The north pole could be ice free in the summer months by 2020.

With the disappearing ice cap no longer reflecting the sun's light, the planet warms quicker and the melting of the Greenland ice sheet accelerates. Sea levels rise faster than predicted by the IPCC, bringing further flooding disasters to Bangladesh and other low lying countries, raising the stakes for the Pacific islanders once again, and melting the glaciers in the Himalayas at a faster rate.