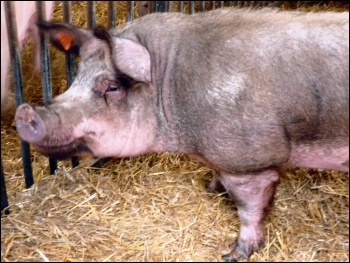 The revelations have been dubbed "Pig Gate", photo by des-eye (Creative Commons)   (Click to enlarge)

David Cameron was made a laughing stock after the latest revelation of the Tories' incredible moral hypocrisy.

His alleged debauched past is back in the press after new claims about a drinking club initiation ceremony. He is said to have performed an intimate act with a dead pig.

Cameron was one of the radically wealthy brats chosen for Oxford University's super-elite 'dining societies'. Toff initiates would reputedly smash, vomit and sexually assault their way through uni.

After trashing and defiling 'lesser' people and their property, they would simply fill out daddy's cheque book.

A 23-year-old student was sent down for six months after taking £3.50-worth of bottled water during the 2011 riots. Cameron's outrage at the "immoral" rioters was hugely hypocritical.

And how does this compare to desperate media attempts to manufacture a sex scandal around left winger Jeremy Corbyn? Most would see a brief relationship with a colleague after separating from his wife as acceptable.

Repulsive secret pasts are meant to help bind top Tories together through mutually assured destruction. But Cameron could still scrape out of it.

The destruction of capitalism's system of mayhem and inequality can't come soon enough.

A coroner has decided that being wrongly found 'fit to work' directly caused the death of a mentally ill father.

Thousands have died after being declared fit to work and forced off disability benefits. The government claims there is 'no causal link'.

Anyone who knows claimants will tell you this is wrong. It certainly was when this man tragically died by suicide.

Meanwhile, BA bosses are projecting over a billion in profit this year, with healthy pay-outs to shareholders and executives. Let's see them evacuate a metal tube full of kerosene.