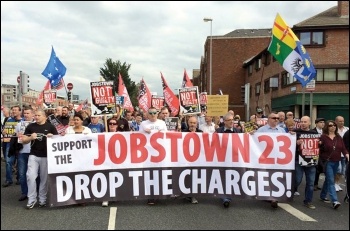 The 'Assembly for Justice' in Liberty Hall, Dublin on 1 April was an inspiring display of working class solidarity with those facing trial for 'false imprisonment' of austerity politician Joan Burton while peacefully protesting in Jobstown.

In the days running up to the event, the Director of Public Prosecutions tried to gag the seven defendants up on trial on 24 April - in reality, to shut down the campaign. The assembly was a defiant response to this attack on free speech.

700 attended, filling the main hall and two overflow venues. The atmosphere was electric. The defendants themselves appeared on the stage wearing gags, representing the restrictions imposed on what they could say at the event.

Jobstown protester Kay Keane said: "On that day, I didn't go simply because of the water charges. I went because I had seen my community devastated by the cuts that [Joan Burton] imposed."

In 2005, Turkish workers in Ireland - super-exploited by Gama Construction for only €2.20 an hour - struck with the support of the Socialist Party. They won up to €40 million of wages they were owed.

In a fantastic gesture of solidarity, Gama workers donated the €3,000 remaining from their strike fund to #JobstownNotGuilty. The rally raised over €10,000 for the campaign.

Vincent McGrath of the 'Rossport Five' spoke of the state harassment their community in North Mayo had faced for standing up to Shell and its gas pipeline.

Another highlight was Paddy Hill of the 'Birmingham Six' - who knows about real 'false imprisonment'. Paddy spent 16 years in jail for a crime he didn't commit. He pointed out he had spent longer waiting in line in prison canteens than Joan Burton spent 'kidnapped' in Jobstown!

Jobstown defendant Paul Murphy, a Solidarity TD (MP) and member of the Socialist Party, pointed out that the real nature of the state had been exposed.

The surveillance of anti-water charges protesters, the witch hunt against police whistleblowers, and now the mass fabrication of breathalyser tests show the police are far from a neutral force for good. The Socialist Party calls for democratic control of policing, accountable to working class communities.

The state functions as defender of the super-rich 1%. The increased repression of protest is linked to the political crisis facing the capitalist establishment.

The Socialist Party fights for a fundamentally different type of society, planned under democratic control of the working class, where wealth and power are in the hands of the majority, not a capitalist elite.

To send messages of support, and for details on affiliating to the solidarity campaign, email [email protected]