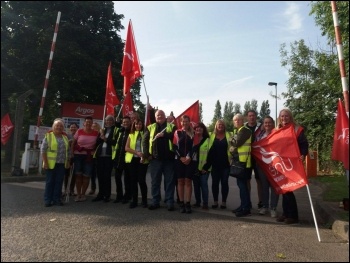 Workers at four Argos distribution centres across the country, including Castleford in Yorkshire, are taking three weeks of strike action to defend jobs and terms and conditions in the wake of Sainsbury's buying out Argos last year.

The action has been prompted by the company's decision to close their Magna Park site and transfer workers to Kettering, around 30 miles away.

Workers are concerned that further reorganisation could be coming in distribution and are seeking agreement about reasonable distances workers could expect to be redeployed.

Support is strong among the 100-plus permanent workers at Castleford. Despite management attempts to get workers from a neighbouring DHL-run Argos warehouse to cover the strike, workers at that site, members of retail union Usdaw, have refused.

In a retail distribution sector which increasingly is dominated by contractors such as Wincanton, DHL, Eddie Stobart and others, defence of in-house distribution networks, where the actual employer can be more directly held to account, is vital.

A victory is important to send a message to those in the distribution sector that workers will not be pushed around and ensure that distribution contractors are organised on the same terms and conditions as in-house staff, or brought back in-house.

On 23 August, Unite the Union announced legal action against Argos, now owned by the supermarket chain Sainsbury's, and employment agencies Single Resource and Templine. It materialised that they are attempting to break the workers' strikes by bringing in paid agency labour at Argos' central distribution centre at Barton business park in Burton-on-Trent.

Unite has accused Argos and those agencies of acting unlawfully.

Argos workers at Barton along with colleagues at Basildon in Essex and Bridgwater in Somerset are striking over Argos' failure to negotiate a fair national agreement concerning redundancy and severance packages. The action began on 15 August and ends on 5 September.

The legal claim cuts the first turf for a high court injunction if Argos and the agencies continue to violate regulations that are there to prevent the use of agency staff during industrial action and collusion in an unlawful manner.

Unite has urged Argos' management to engage constructively and positively in talks, rather than attempting to strike bust, and to lay out the basis for a deal concerning the lack of conditions that safeguard workers.