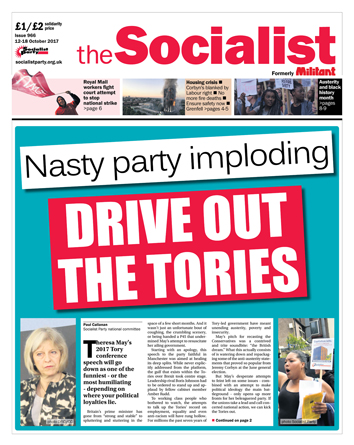 TUSC members and supporters in the borough of Halton in Cheshire are campaigning against the payment of tolls on the soon to be opened Mersey Gateway crossings.

The toll system will be run for profit by the French arm of Spanish conglomerate Abertis and will do immeasurable harm in an area which is among the most deprived in the UK.

Workers and families across the region are already struggling with the effects of Tory austerity. The last thing they need is another drain on resources which are already stretched to the limit.

The geography of the area means that crossing the Mersey is the only way to access goods and services not available in one or the other of the towns that make up the borough. Runcorn, for example, has one men's clothes shop. It has no walk-in NHS centre.

The plans for taxi customers reclaiming the additional cost on journeys are ill-conceived and unworkable, according to local cabbies canvassed by TUSC.

Small businesses will suffer the consequences of customers being put off from travelling across the Mersey due to the increased cost.

The area's entertainment, restaurant and pub industries will face similar problems. Larger businesses will either pass on increased costs to customers, creating a new source of inflation in the region, or absorb the cost and make savings by cutting jobs or wages.

Businesses will also face the loss of skilled or experienced workers who will be forced to bear the brunt of additional outlay on their journeys. 40% of workers at one local manufacturer face the prospect of paying between £60 and £90 a month in tolls, because they live outside the borough.

NHS workers employed across the local trusts, struggling to make ends meet under the constraints of the unjustifiable Tory wage cap, will now have to fork out more money just to go to work.

David Boyden of the NUT told us that he has "genuine concerns for the recruitment and retention of quality teaching staff" at the various schools across Runcorn and Widnes.

TUSC in Halton stands with workers, trade unions and community groups in opposing these charges, and will fight any attempt to prosecute those who can't or won't pay. We say: no to the tolls, and no to the profiteers!

This version of this article was first posted on the Socialist Party website on 5 October 2017 and may vary slightly from the version subsequently printed in The Socialist.