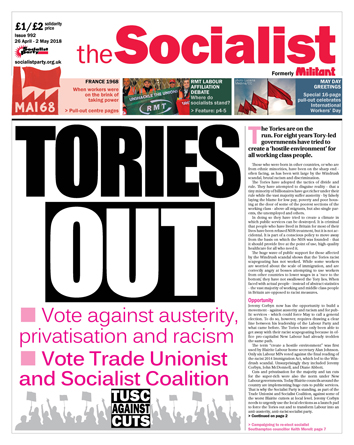 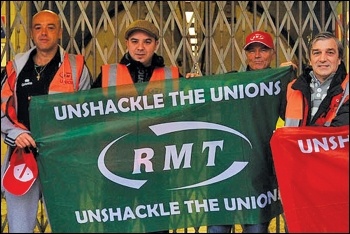 Should unions use affiliation to push for change in Labour, or simply hand over money to the Blairite machine uncritically? photo by Paul Mattsson   (Click to enlarge)

The Socialist Party welcomed the move, seeing it as a chance, if the affiliation terms were right, for the RMT to spearhead the changes necessary to completely overturn the political and organisational legacy of Tony Blair's New Labour, from which the union had been expelled in 2004 (see 'The left unions and the Labour Party affiliation debate').

Now the Labour Party has formally invited the RMT to re-affiliate and the union has convened a special general meeting (SGM) for the end of May.

The Socialist reprints below extracts from a special edition of The Red Line, a bulletin produced by Socialist Party members of the RMT, arguing that the terms offered are not right and that the union should not support re-affiliation to the Labour Party at this stage.

The 2017 RMT AGM had a thorough discussion on the union's political strategy, including our relationship with the Labour Party.

The AGM concluded that an immediate or unconditional affiliation to the Labour Party was not appropriate.

The possibility of affiliation was left open, however, dependent on the party's response to several issues and a full consultation with branches culminating in an SGM.

The Labour Party has now responded, with its Q&A reply contained in the document titled, 'RMT Labour Party Affiliation Discussion Paper', and the branch consultation is underway.

Socialist Party members of the RMT welcome the fact that a dialogue with the Labour Party has begun. A transformed Labour Party, with full democratic rights and due weight in its structures for trade unions - the collective voices of workers - would take forward the objectives of the RMT as defined in our rule book: to "improve the conditions and protect the interests of its members" and "to work for the supersession of the capitalist system by a socialistic order of society."

Not for nothing did Margaret Thatcher say her "greatest achievement" was Tony Blair's New Labour. With its commitment to privatisation, anti-union laws, wars and austerity, and the gutting of the trade unions' role within the Labour Party structures, for over 20 years workers no longer had a party that was ours.

That's why the RMT, even though we were not affiliated to Labour, was the first union to back Jeremy Corbyn when he stood for the leadership in 2015.

The RMT was the second biggest donor to both his leadership campaigns, in 2015 and 2016, behind only the 1.4 million-member Unite union. No one can doubt where we stand.

But the question is: how can the RMT best continue our support for Jeremy Corbyn to overturn the political and organisational legacy of New Labour and transform the Labour Party? Are the terms of affiliation currently on offer - losing our political independence and handing £240,000 a year to a largely unreconstructed party machine (if we affiliate our full membership) - really the best way to pursue the RMT's objectives at this moment?

Key issues for the RMT

An RMT predecessor union was one of the principal founding organisations of the Labour Party in 1900. The new party was to be different from the Liberals and Tories, not because there would be individual trade unionists in its ranks - at that time some union leaders stood as Liberal Party candidates and even as Conservatives!

Instead, the aim was to have political representatives under the collective control of workers - for Labour MPs and councillors to actually implement union policies.

What is striking about the Labour Party's Q&A reply to the RMT is that no commitments whatsoever are given on the key policy issues we asked them about.

There is nothing on what the party will do to stop Labour-controlled authorities implementing driver-only operation (DOO) and sacking guards on Merseyrail and Rail North, massive funding cuts in Transport for London, or privatisation plans for the Welsh railways.

Yet right-wing Labour-led councils continue to slash jobs and local services and nothing is said about it.

The national party has shown it can discipline representatives for offensive social media activity. So why can't it instruct its mayors, councillors and first ministers to stop implementing offensive policies? That actually might be worth £240,000!

Yet all the reply says is that "RMT will be free to campaign against cuts from any quarter", "even in Labour-held councils" and other authorities.

We do that already. And we have the option of standing our own candidates or supporting others seeking to replace councillors making the cuts.

But now we're asked to give up that right, for nothing in return. What kind of deal is that?

Where are unions' collective rights?

Our strength as a union comes from the fact that we represent decisions reached collectively by the individual members.

The Labour Party reply lists ways that individual RMT members could participate in the party - for example by voting in future leadership elections, attending local meetings, accessing training to be a Labour candidate.

But of course individuals can do all this already, without RMT affiliation. The question is, what new collective rights will the RMT gain from affiliating now, under the current Labour Party structures which are still largely those inherited from Tony Blair's New Labour regime?

After another round of attacks on the role of the unions within the Labour Party in 2007 the late Tony Benn wrote that "there would be no point in affiliating as a union in the hope of discussing policy" - or, indeed, controlling MPs or the party machine.

Unfortunately he did not draw the same conclusion as Bob Crow and the RMT did of the need for unions to therefore develop their own independent political voice.

But he accurately described the New Labour structures as a "different party" to the one that he had joined.

The unions' share of the vote at Labour Party conference was cut to 50% in 1995. Formal policy-making powers were transferred from conference to the National Policy Forum, where unions hold just 16% of the votes. And locally the situation is no better.

Before New Labour, union branches were able to nominate candidates in parliamentary selection contests but now not even a union the size of Unite has been able to ensure its candidates get onto shortlists!

Is it any surprise then that the overwhelming majority of Labour candidates in this year's local elections are from the right-wing, opponents of Jeremy Corbyn and supporting more cuts and job losses?

We would have fewer votes at the national policy forum than the House of Lords Labour Group does.

And, as the Labour Party Q&A concedes, even with 80,000 affiliated members, we would not be guaranteed a seat on Labour's national executive committee. Affiliating with just 1,000 members on the other hand, as has been suggested, would give the RMT less weight than the Fabian Society.

The fact is, our current political strategy allows us to make a far greater impact than we would have in the structures that, unfortunately, are still in place from the 20 years of New Labour.

It is true, of course, that Jeremy Corbyn won the Labour leadership in 2015, held off the Blairite coup a year later, and pushed through a radical general election manifesto against the opposition of most Labour MPs.

But the main lesson of his victories was that he achieved them by appealing over the heads of the Blairites to those outside the formal structures of the party. That's what needs to be done again.

Labour must be completely transformed if it is to be able to resist the pressure of the bosses and their political, media and legal establishment and carry out the socialist policies that the working class needs.

If the Labour Party democracy review - due to report in September - doesn't restore trade unions' collective rights or bring back mandatory re-selection of MPs, Jeremy should present his own proposals directly to trade unionists, members, and registered supporters (like in the leadership contests), and not get bogged down in the quagmire of New Labour-origin 'procedures'. Then it would be worth discussing if affiliation offered fighting trade unions like the RMT a viable way to advance our goals.

In the meantime the RMT needs to keep its ability to act independently. That's the other, vital lesson of the Labour leadership contests.

As a politically independent union, the RMT was able to contribute more to Jeremy's campaign than the Labour-affiliated rail unions, Aslef and TSSA, whose £100,000-plus annual affiliation fees instead helped to finance the anti-Corbyn Labour apparatus. John McDonnell praised the RMT for being the first union to fund Jeremy in 2015, saying that without our support he could not have fought the campaign that he did.

It's a fact. Affiliation would not have added a single vote to Jeremy Corbyn's score in the leadership elections as any RMT member could vote as an individual party member or as a registered supporter (for just £3 in 2015). But it would have stopped us backing him as a union in the way that we did.

It is welcome that a dialogue has begun with the Labour Party. But it must be an honest one. Unfortunately many of the replies to the RMT's questions dress up the reality of the position and are sometimes completely misleading.

For an honest dialogue

The Q&A says, for example, that affiliation would enable the RMT "to formally nominate for any future leadership election" - but this is purely symbolic because MPs have a veto on which candidates are allowed onto the ballot paper.

Another example - the Q&A says that the RMT could affiliate without financially supporting the Scottish Labour Party, but then admits that "RMT affiliation would be to the Labour party at UK level". Why not tell it as it is? Once the cheque is handed over it's no longer our money.

One unanswered question is, who drafted the document? The window-dressing and evasions are disappointing if they were written by a left-wing party official.

Wouldn't it have been better to admit up front that there's a massive job to be done to overturn the legacy of Tony Blair on the democratic functioning of the Labour Party and the unions' role within it?

At least then we could have an honest discussion about the balance between the (extremely limited) opportunities and (still considerable) overheads that affiliation would bring.

And then seriously discuss how the RMT can continue to contribute to the struggle to consolidate Jeremy's position, whatever the SGM decides.