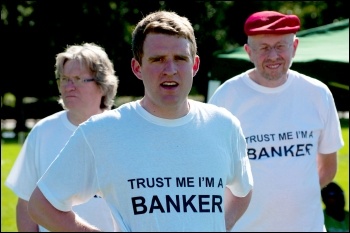 George Osborne successfully pressured US prosecutors not to press criminal charges against London-based bank HSBC in 2012. A US Congress committee report on 11 July made the revelation.

HSBC had been laundering money for drug barons and terror groups, and aiding international sanction breaking for regimes including Iran. In his role as chancellor, Osborne pleaded with the US Department of Justice, claiming criminal charges could destabilise the economy.

The Socialist recalls the banks doing that just fine on their own in 2007-8. They did not face serious repercussions then either. Osborne's real concern was no doubt to keep his super-rich mates out of jail.

Even the sector's so-called regulator, the Financial Services Authority, "weighed in very strongly" against charges, said one US Treasury employee. HSBC got away with a fine.

At base, the law and its enforcers under capitalism exist to protect private profit, not challenge it. The Socialist says: nationalise the banks and finance sector under democratic workers' control. Try the banksters for their crimes against the working class.