Towards a general strike against the Nieto government! 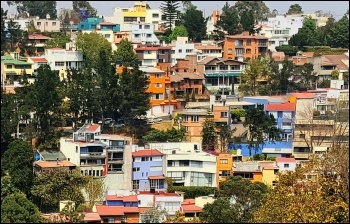 In recent weeks, mass protests have erupted throughout Mexico following a hike in gas and electricity prices - dubbed the "gasolinazo" - decreed by the right-wing Peña Nieto administration. Here we publish an edited article from socialistworld.net

The 14%-20% price hikes are part of the 'liberalisation' of petrol prices, through which the government has been withdrawing completely the state subsidy, bit by bit, since 2012.

In the last four years, petrol prices have increased by 60%. Now, prices will be fixed on the basis of supply and demand, in line with international prices like any other commodity. In February, a new price hike will be proposed, and from then on the price could rise on a weekly, or even a daily basis.

The backdrop is the privatisation of Pemex, the state oil company, which has now been extended to distribution and supply to petrol stations. This is very valuable business - 65% of petrol consumed in Mexico is imported from abroad, and the transport of this petrol will now be in the hands of private companies.

These price hikes are directly linked to the thirst for profit of these private companies. Yet again it is the working class who will pay for the consequences of this privatisation.

The response of the Mexican working class to the gasolinazo attack has been intense mobilisations and protests. Mass demonstrations in different cities, the blocking of roads, occupation of petrol stations and closures of Pemex distribution centres, are some examples of the actions.

The government is aware of the widespread discontent and since the evening of 3 January, they have planted state provocateurs in the movement to provoke looting and vandalism at service stations and shops. Despite these provocations, and in response to them, the movement must continue, extend itself to more cities, and unite its forces in the coming protests.

The wave of looting spread from the north of Mexico City to places like Ecatepec, Naucalpan, Atizapán, Tecámac, Huehuetoca, Tultitlán and elsewhere. Some media reports have told of how the PRI (Nieto's party) government of Mexico state paid lumpen bands to lead this looting. And, that police joined in the looting of stores.

It is no accident that these acts have taken place in the part of Mexico City which has seen the most intense and numerous protests, where petrol stations and major motorways have been shut down by protesters.

The looting has attracted a layer of the most downtrodden in society, who see it as an opportunity to momentarily alleviate their misery. Once the provocateurs have managed to draw enough of these elements into the looting, the police arrive and make arrests in big numbers. This is in order to give some legitimacy to their tactics, and conceal that it is really the state which is behind this looting and vandalism.

The media is complementing this dirty work of the government, creating a climate of panic and hysteria, trying to equate these mass protests with senseless violence.

On the other hand, they also open the door to state repression, creating an atmosphere in which the intervention of the police and army can seem more justified, not only against looters but against the movement as a whole.

It is fundamentally necessary to denounce the government as absolutely responsible for the looting and vandalism. For many years the government has been creating groups of thugs in universities (called 'porriles') which carry out all sorts of violent acts in order to damage the prestige of the left student movement. They are now repeating the same methods, but in the city communities.

It is important that the "informative brigades", which during the street blockades concentrate on winning the sympathy of working people for the struggle, are maintained. It is also important to identify all the elements which are inciting looting and vandalism and to isolate them; to explain to all that these are not useful methods, which only bring repression and discredit the movement.

There should be no aggression whatsoever towards workers during protests at Pemex sites - these workers are part of our class to be won to the struggle and not our enemies.

Finally, we should work to build a national, coordinated movement against the gasolinazo. This struggle must be built as an example for all other sectors, and for the left, to take up the fight against the government.

Ultimately, the protests should converge in a general strike against the cuts, privatisations and anti-worker policies of the Peña Nieto government.