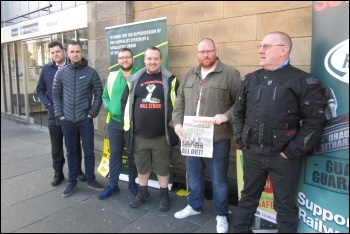 Train guards in Newcastle, members of the RMT union, are participating in the ongoing battle against driver-only operation.

Speaking to the Socialist on 25 August one of the strikers said: "This is our 24th day of strike action. The mood on our picket line is very determined and the strike is rock solid."

Despite the strike creating disruption, the support from the travelling public was reported as being "incredible". Strikers said that there is an understanding that this dispute is about passenger safety: "We've had strong support from disabled people, who are worried about their ability to access trains. Also from women's groups who are concerned about anti-social behaviour on trains. At a time of increased sexual assaults, having no guards on the train is crazy."

There is a lot of anger against Arriva Rail North. It was explained that: "The union entered into talks with the company for the first time in months. The union even called off strikes for the talks to take place. Despite this act of good faith by us, the talks were just a sham - a stalling tactic. They treated our officials with complete contempt. It became clear they had no intention of reaching a settlement."

This stalling tactic has clearly enraged RMT members. There is a growing mood among guards that the strike action needs to be ramped up.

From the picket line, RMT members also stated their support for Liebherr strikers in Sunderland who are fighting for an improvement in their wages.