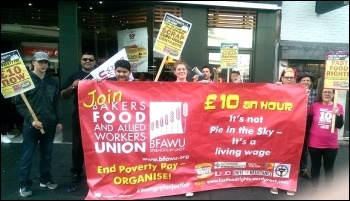 "I have experienced first-hand the insecurity of zero-hour contracts, low pay and abuse by the management, to both me and my fellow workmates", says Richard, a McDonald's worker and Socialist Party member.

These grievances will be all too familiar to many workers and are among the reasons McDonald's staff are striking for the first time on 4 September.

Richard says: "Seeing workers mobilise in two restaurants and balloting in favour of action has inspired me to build the union in my workplace and fight for the same pay and conditions.

"I am 100% behind the union taking strike action and will also be attending the protest outside McDonald's HQ in East Finchley, London, on 2 September. Solidarity with the McDonald's workers walking out on the 4 September!"

The workers, members of bakers' union BFAWU, balloted at Crayford, south east London, and Cambridge stores have voted by an incredible 95.7% in favour of strike action.

Already, by voting for the historic strike, the workers have forced McDonald's to implement the twice-promised offer of guaranteed hours for every McDonald's worker in the UK.

McDonald's workers will join a list including health workers in east London, bin workers in Birmingham and janitors in Glasgow who have been fighting for better pay and conditions - and in the case of the latter two, winning.

Their action shows we can beat the bosses and their inspiring strike action should be a signal not just to employers, but to other low-paid, exploited workers that we can fight back and organise to get rid of zero-hour contracts, bullying bosses and poverty pay.

On 20 August, as a member of BFAWU, Richard attended a McDonald's strike committee meeting as a visitor. He reports: "The meeting took place at one of the strike locations in Crayford and a decision was made to walk out on 4 September. The step was a historic decision and will be the first ever McDonald's strike to take place in the UK.

"At the meeting McDonald's workers from Crayford and Cambridge spoke of the reasons why they decided to take strike action. These included the failure of the company to roll out fixed-term contracts and the continued utilisation of exploitative zero-hour contracts, low pay, job insecurity and bullying management."

The strike takes place on 4 September. Workers are also fighting for a £10 an hour minimum wage now, and union recognition.

The Socialist Party fights for these demands for all workers and will be supporting the McDonald's strikers in their dispute.

You can donate to the strike fund and send messages of support at fastfoodrights.wordpress.com, and join the #McStrike events and picket lines: