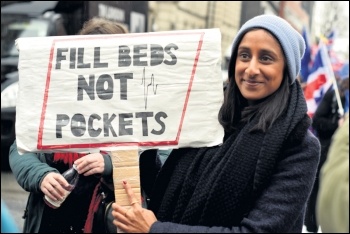 The Tories make dangerous claims like 'we're all living longer' and 'people are demanding more treatment'. Of course people want the most up-to-date and effective treatment, it's 2018. And why should the fact that some people are living longer be a problem?

It's not our fault the NHS is under pressure. It's not the fault of the doctors, nurses, cleaners, porters and the other thousands of dedicated workers who deliver such an important part of a decent society. We have to point to those who leach off the NHS, and their political representatives.

The pharmaceutical companies, the building companies, the suppliers of the equipment. Why should these people be able to make huge profits from our NHS?

You can buy three boxes of paracetamol in a pound shop... for £1. But big pharma charges the NHS up to 20 times the price in Asda, according to 2014 analysis by the Telegraph.

And why is everything else supplied by private companies? Surely it would be more sensible to use the expertise of those workers to build and supply all that on an organised, nationalised basis? That would save our hard-earned billions going straight into the pockets of rich shareholders and the other fat cats.

Just down the road from me is a beautiful new hospital, the Royal London, built on the site of one of the oldest hospitals in Britain, where much pioneering work has been done over the decades.

But now the 'pioneering' work is done by the giant building companies who have used the 'private finance initiative' (PFI) to line their pockets and saddle the NHS with crippling debt.

It's time to put a stop to these companies bleeding the NHS dry. The Socialist Party campaigns not just to defend the NHS, but to rebuild it without the vultures of big business flying around.