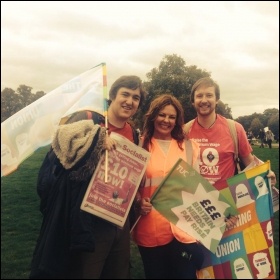 The shop workers' union Usdaw's Eastern divisional conference on 14 and 15 November took place against the backdrop of Jeremy Corbyn's election as Labour leader and the changed situation since.

However, despite an enthused, pro-Corbyn mood among the workers, shop stewards and some officials who attended, the guest Labour speaker was Enfield North MP, Joan Ryan, who backed right-winger Liz Kendall in the leadership election.

Despite being a member of Labour-affiliated Usdaw, she reflected none of the mood backing Corbyn.

Ryan didn't mention Corbyn once in her opening remarks; it wasn't until questions were asked by reps at the end that she was forced to comment on her new leader.

This was retorted later in the day by John Dunn, from the Orgreave Truth and Justice campaign who said "It's not up to Corbyn, it's up to us to support him", which received the biggest round of applause of the weekend.

She is a perfect example of why Jeremy Corbyn was wrong to say he opposed re-selection of right-wing MPs who don't represent his policies or the thousands of new members who have joined during and after the leadership election. These are also the same MPs who will look to move against him when the opportunity is presented.

Industrial issues covered at the conference include discussions on Sunday Trading (see issue 867) and the trade union bill which both received complete opposition from the 100 in attendance.

'Black Friday' takes place on 20 November and could see a repeat of last year when there were frenzied scenes at supermarkets to grab cheap bargains. This was also discussed and there was agreement that Usdaw should demand measures are put in place to prevent a repeat.