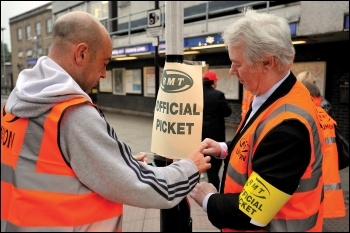 RMT transport workers' union has called a 48 hour strike on 14-15 October as the union continues to fight against London Underground's (LU) plans to cut around 900 jobs and reduce grades and pay-rates across stations on the tube.

In response to previous action by RMT, LU has been forced to offer significant changes to its proposals that could protect the pay of existing members.

But LU still plans cuts of around £8,000 for new staff or those who get promoted in future. Existing staff would have to take on many new responsibilities in order to keep their pay.

LU is now insisting that any changes to its plans are linked to the unions accepting the proposals and moving on to discuss how they are implemented. This is unacceptable to RMT.

RMT has fought a tenacious struggle against LU's plans in spite of being left isolated by the other unions on the tube. A unified strike by RMT, TSSA and Aslef could deliver a knock-out blow against LU management, the London Mayor and Department of Transport.

Nevertheless, RMT has forced LU to change its position and this action must force further movement.