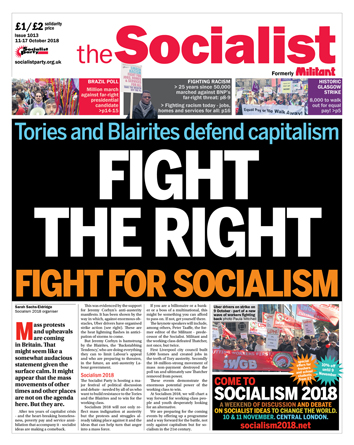 Dancing distractions, Brexit boos, Johnson leadership bids: The Tories are afraid. Of the Brexit negotiations, and of a general election

Workers at several branches of McDonald’s, Wetherspoon and TGI Fridays have struck together, joined by couriers for Uber Eats and other gig economy workers #FFS410

Striking workers at the Ivy House pub in Nunhead, south London, have won all their demands after three days of stoppage

At midnight on 26 September, staff at cable manufacturer Prysmian in Eastleigh downed tools, with more strikes and a demo planned

Fight for socialism: Mass protests and upheavals are coming in Britain. That might seem like a somewhat audacious statement given the surface calm. But they are

12 years to halt irreversible climate disaster. Capitalism’s time is up

Real and immediate horrors face humanity even if the world limits global warming to the current target of 2°C.

A historic mass strike for equal pay by 8,000 council workers in Glasgow, 90% of whom are women, will take place on 23 and 24 October

Nationalise Amazon! £10 an hour now! Collective workers’ action has forced billionaire boss Jeff Bezos to concede pay rises – £9.50 an hour in the UK and $15 in the US

It’s one world for the super-rich, and another for the rest of us. Brett Kavanaugh, wage depression, deaths

In 1993 a mass protest demanded the HQ of the far-right BNP be shut down – with Militant, predecessot of the Socialist Party, playing a central role

Brazil’s most polarised and unpredictable election campaign in recent history has ushered in a new era for the country, with the far-right candidate coming within inches of victory

Socialists in Mexico have been attacked by fascistic gangs

“Inspired by the successful campaigns for marriage equality, repeal of the anti-abortion laws and abortion rights, young people from the ‘locked-out generation’ are turning their attention to housing”

Liverpool 47 plaque: “Better to break the law, than break the poor”

Palestinian solidarity: “We are not victims. We are freedom fighters.”

Ahed Tamimi addressed a meeting in Coventry via Skype

Ninety people gathered for a public meeting on Saturday called by Save Our NHS Leicestershire to oppose plans to remove, without consultation, intensive care beds from Leicester general hospital

Save Huddersfield Royal Infirmary – the fight goes on

The murky world of the ‘Big Four’ accountancy firms

Do you have something to say? Letters to the Socialist’s editors. Varoufakis wrong on far right; GDPR at uni; street fighting; rail safety