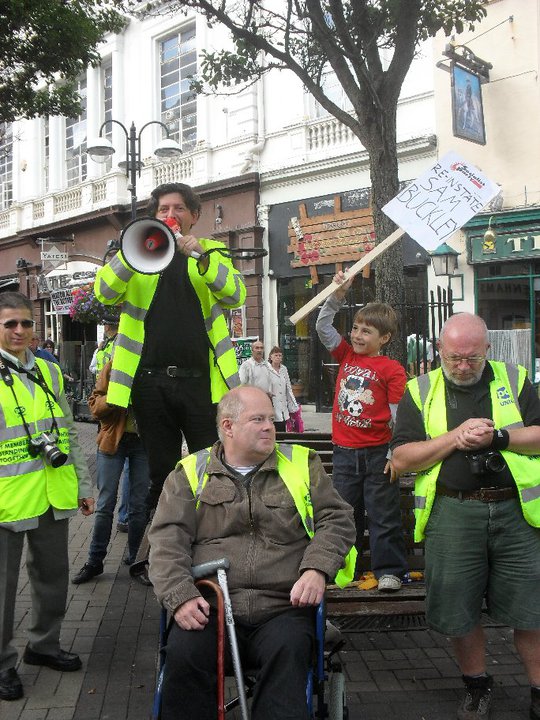 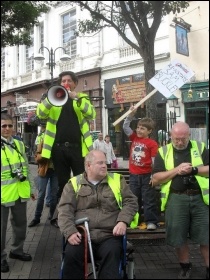 Around 200 people marched through Hastings on 18 September to demand the reinstatement of victimised reps at the Child Support Agency office in Hastings and a Parliamentary enquiry into the actions of area management.

Jeremy Birch, leader of Hastings council spoke, giving his full support to the campaign and a message of support from John McDonnell MP was read out: “I will do all I can to help. I will raise this at the Parliamentary Group and we will use every mechanism we can to expose what has happened and seek redress.”

Sam Buckley, PCS CSA Hastings secretary, the latest sacked branch officer, challenged the Area Management team to support the demand for an enquiry if they truly believed their actions had been right.

The march also heard from Tony Mulhearn, former Liverpool City councillor, who said he was proud to support reps dismissed for fighting for their members, while other speakers urged the public to attend the trades council’s meeting against cuts on 7 October.

Other speakers included Dave Richards and Dominic McFadden from PCS, Eddie Fleming, the first union officer to be sacked, Alex Richardson of Youth Fight for Jobs.

Delegations came from London, Brighton, Tunbridge Wells, Dover, Oxford, Portsmouth, the Isle of Wight, Oxford, Milton Keynes, Bristol and Newcastle as well as from Hastings and its neighbouring towns. The rally ended with a pledge to step up the pressure and build the campaign