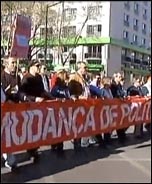 The collapse of the Portuguese ‘Socialist Party’ government of prime minister Jose Socrates came during a period of intense economic and social turmoil. Mass protests and strikes have given a picture of anger and unrest in the face of the austerity measures which the outgoing government, in collusion with the capitalist opposition has imposed, at the behest of the vultures of the financial markets.

The fall of the minority government came after ‘PEC IV’, a fourth austerity package, failed to pass through parliament in a vote on 23 March. The conservative PSD opposition party, after over a year of faithful support from the opposition benches for the first three ‘PECs’, voted against the measures, leading to the prime minister’s resignation. 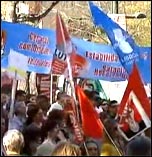 This move by the PSD was wholly opportunist. This party, along with its prospective coalition partners, the Christian Democrats, shares the same fundamental political approach, that of attacking working people to pay for the crisis.

However, their voting against the bill has another significance, being the result of the massive pressure exerted by the opinions and actions of the vast majority in Portugal, who have had enough of these savage policies. In the ten days immediately preceding the vote on PEC IV, a combined 400,000 people hit the streets on two Saturdays of mass protest. (Out of a population of 11.8 million).

On 12 March, 300,000 people (including 200,000 in Lisbon) joined the protests organised around “desolate generation”, a loose campaigning group on a Facebook page, which demands an end to the precarious exploitative conditions forced on workers, and to massive youth unemployment.

Then, 19 March saw 100,000 demonstrate in Lisbon, called by the CGTP trade union federation.

A wave of national strikes, of transport, postal and education workers among others, accompanied this period of mass action.

These protest actions show both the massive opposition to Portuguese capitalism’s agenda, but also the immense potential power of the masses when organised, and the organised workers’ movement in particular.

On 24 November 2010 a oneday general strike paralysed the economy when over 85% of workers downed tools. It is this opposition and potential power of the working class that made the capitalist opposition fearful of voting for yet another PEC. This is something which should be registered by working people and socialists in Portugal and internationally: the Portuguese government has essentially been overthrown by the pressure of workers and youth in struggle.

And this is despite the limited strategy of the trade union leaders, who have effectively taken the path of demobilisation since the general strike. Imagine what would be possible with a really effective strategy, armed also with a working class political alternative.

The next likely government will not satisfy the demands of the majority.

European Union/International Monetary Fund intervention beckons, as Portugal looks set to follow Greece and Ireland in accepting ‘bailout’ packages, to facilitate the continued paying off of the bad debts of European bankers and speculators out of workers’ taxes.

Such a package will be attached to brutal austerity as a condition, including the decisive elements of the PEC IV, but also with many more vicious measures included over a long period.

Socialismo Revolucionario (CWI* in Portugal) is opposed to any EU/ IMF intervention, and calls for not a cent of public money to be spent repaying the debts of the super-rich.

The nationalisation of the banks, resources and key sectors of the economy under democratic control, would allow massive investment to improve people’s lives, instead of endless cuts.

The CWI calls for the left parties (Left Bloc and Communist Party – which in Portugal command over 20% of the vote combined) to put forward a united front based on such policies in the upcoming elections.

With Portugal the probable third bankrupt state to emerge from the chaos of the crisis in Europe, the disaster of the bosses’ European Union is being further exposed. The only alternative is a socialist Europe based upon workers’ solidarity.