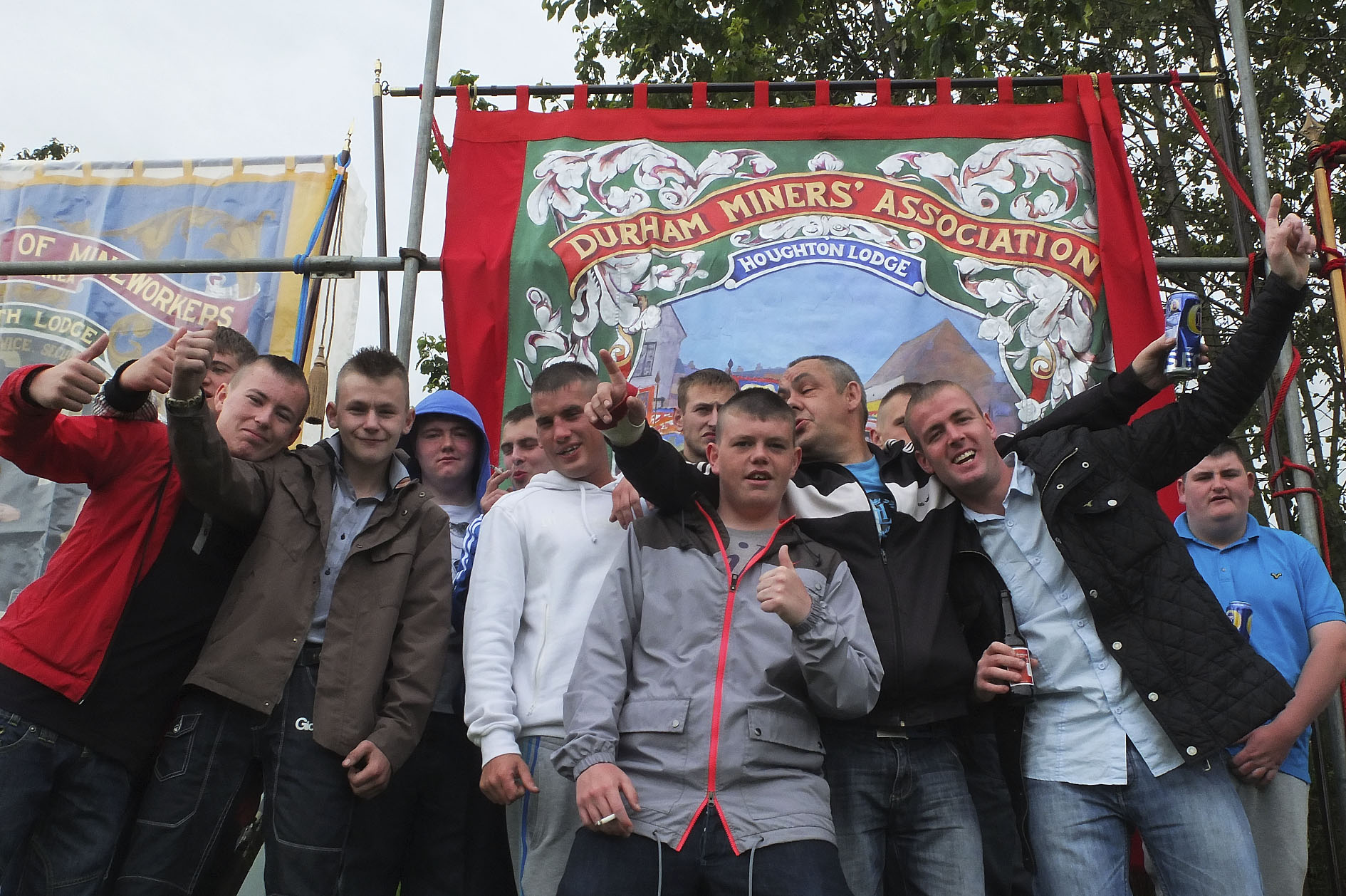 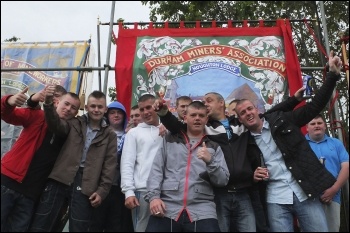 Ed Miliband spoke at the Durham Miners’ Gala, which is regarded as the largest working class event in Britain.

This is the first time in 23 years that a Labour Party leader has spoken at the “big meeting”.

Last year Miliband was invited to speak, but declined as RMT transport union leader Bob Crow was also on the platform.

This year Bob Crow may not have been a speaker, but the RMT got its message across as a plane with its banner flew over the field with the message: “No to Con-Dem cuts; No to Labour cuts”. 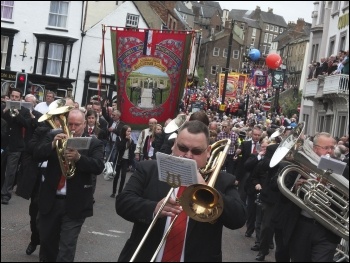 One of the huge draws to the Gala are the traditional brass bands of the ex-mining communities. As the bands march through Durham city each one stops at the County Hotel, where trade union and Labour Party officials stand on the hotel’s balcony.

This year an increased number of bands played either the Red Flag or the Internationale, this was definitely aimed at Miliband.

At one stage outside the hotel a huge cheer went up. Was this Ed Miliband coming onto the balcony? No. The huge cheer was for Tony Benn, who always receives a warm welcome at the big meeting.

Miliband was the last speaker at the rally. Clearly the numbers swelled as he took to the podium. However, the applause was polite rather than enthusiastic.

Ed started by saying he had come to “honour the traditions of the north east”. Someone heckled: “You’re late – 23 years”.

His biggest applause was when he told the rally the task of the next Labour government was to tax the bankers’ bonuses and to get young people back to work. His promise to break the power of Murdoch and end the rip-off of the energy companies, also got a good response, though one or two hecklers were shouting: “What about trade union rights?”

When Miliband finished it was noticeable that a sizeable minority did not applaud. Also, during the speech a couple of the brass bands were seen marching off the field, this was seen as a snub to the Labour Party leader.

After Miliband’s speech I spoke to a Prison Officers Association rep, Dean Acaster, who said: “He didn’t say anything. It was just rhetoric. There was no substance to his speech, no promise to restore trade union rights”. This view was repeated by many who came to our stall afterwards. 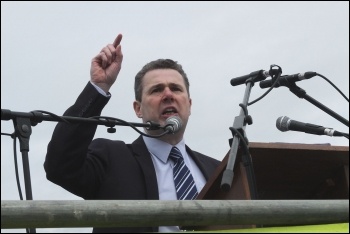 There was huge applause and cheers for them and a standing ovation from all those on the platform. Afterwards, many people commented that Miliband participated in the standing ovation for the Spanish miners, but had crossed the PCS picket line at Westminster!

However, the most inspirational speaker was Public and Commercial Services union (PCS) general secretary Mark Serwotka.

As Mark spoke, many who had been sitting on the grass stood up to listen intently. He said that from the platform he could see Durham jail, and we should not rest until we see News of the World former editors Andy Coulson and Rebecca Wade in there. This received huge applause.

He spoke of the young, unpaid workers forced to sleep under bridges whilst working on security for the Queen’s Jubilee.

The despair of a JSA claimant who had chained himself to a railing, then set fire to himself. The débâcle of G4S – Mark pointed out that if G4S was in the public sector it would be derided in parliament.

He ended by saying, “We have to be united”, but we have to be clear on what basis, and that we should “oppose all cuts in our services”.

Mark undoubtedly received the loudest applause of the day. His was a fighting speech. He laid out that “we have to fight like lions”, because “if we lose we will face devastation”. 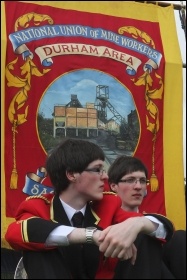 However, he missed an opportunity, in front of Ed Miliband, to clearly warn that PCS policy is now a preparedness to stand against parliamentary or council candidates who either support or carry out cuts.

The Socialist Party tapped into the mood of workers attending the Gala. Our petition ‘Jail the Bankers’ raised smiles, though some did complain – our petition did not go far enough! Some suggested hard labour, others the guillotine!

On our stall we raised that it would take full-time workers on the minimum wage 185 years to earn the equivalent of the £2 million bonus given to Barclays’ Bob Diamond.

The need to nationalise the banks, under democratic workers’ control, was well received. Alongside selling numerous socialist pamphlets and books, we also sold around 100 copies of the Socialist.

As a kid, I loved listening to a Peter Sellers sketch called “Party Political Speech”, in which Sellers spoke, as a politician, for nearly five minutes but managed to say precisely nothing.

I was reminded of that sketch this weekend when Ed Miliband spoke at the Durham Miners’ Gala. But, as great a comic actor as Sellers was, Miliband managed to outdo him, because he spoke for 10 minutes without saying anything, other than a not exactly earth shattering promise that a Labour government will invest in producing ‘clean coal’, and by paying tribute to past Labour leaders who’ve spoken at the Gala.

Ed, if you think that you can get some of the ‘glory’ of ‘the good old days’ to rub off on you by appearing where John Smith, Tony Blair and Gordon Brown didn’t dare to venture, it ain’t gonna work!