Stop the exploitation of workers by ruthless multinational 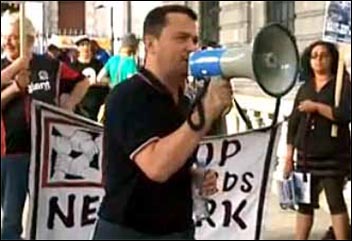 Trade unionists in Britain have been stunned by the scenes of slaughter on TV from the Marikana platinum mine in South Africa. For many veterans of the anti-Apartheid movement, it was all too reminiscent of the massacres in Sharpeville and Soweto.

But horror turned very quickly to anger when the reports came through that 34 striking miners were killed by the police, with 78 injured, for just fighting for a decent living wage. As one miner said: “We can’t live on this money.”

To add insult to injury, the owners of the mine, Lonmin, gave mourning miners an ultimatum to return to work or be sacked. In a heroic show of solidarity, less than a third went to work on Monday, meaning that the pit couldn’t operate.

Faced with an outraged public in South Africa and internationally, the African National Conference (ANC) government of president Jacob Zuma, which had steadfastly backed UK-based Lonmin, applied pressure on the company to drop the ultimatum. 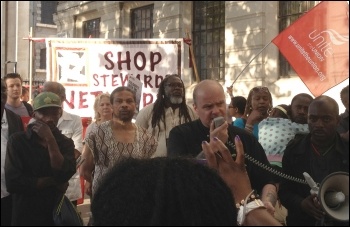 The Socialist Party and the National Shop Stewards Network send our solidarity and support to the miners and their families.

We know that the company’s ruthless attitude towards its impoverished workforce is driven by the falling price of platinum on international markets due to the capitalist recession. The Marikana workers are being made to pay for the bosses’ crisis – in blood!

We lobbied the South African High Commission in London on Friday 17 August and again on the following Monday, demanding that the ANC government stand down the police and stop the killings on behalf of this brutal multinational corporation.

The Socialist Party calls for the mine and all of Lonmin’s operations in South Africa to be taken out of their blood-soaked hands and nationalised in the interests of the miners and the South African working class as a whole.

Moreover, this is an act by a militarised police force of the ANC government, killing workers to defend the profits of this company.

This raises the need for the South African working class to build a new mass party with socialist policies that is prepared to break with the rule of the corporations and build a real future for the working class and poor.

The African National Congress (ANC) regime of president Jacob Zuma has attempted to distance itself from the massacre of miners at the Marikana platinum mine in Rustenburg, South Africa, by announcing a government commission of inquiry and declaring a ‘week of mourning’. Such is the public outrage over the killings that the government, having backed UK-based mining company Lonmin in demanding an immediate resumption of operations at Marikana, has now pressured the company into lifting its threat to sack the miners.

The Democratic Socialist Movement (the Socialist Party’s counterpart in South Africa) has condemned the massacre and called for solidarity action at all the region’s mines and a nationwide one-day general strike to launch a fightback.

The government says 34 workers were shot dead, and many more injured, on 16 August following a massive police assault to crush a strike by thousands of workers at the Marikana platinum mine outside Rustenburg. This appalling figure is likely to be an underestimate.

This deadly assault is in addition to at least six mine workers who were killed in clashes earlier on in the strike which began on 10 August. Two policemen and two mine security guards were also killed in the near civil-war-like conditions.

It is clear that the Lonmin bosses, backed by the entire big business elite and its servants in the ANC government, the police and army, are hell-bent on restoring order at any cost.

The background is that thousands of workers at Lonmin, the world’s third largest platinum producer, went on strike in demand of an increase from their current monthly R4,000 (£307) poverty wages to a R12,500 (£958) living wage.

The strike was initiated by workers belonging to AMCU, a break-away union from the dominant National Union of Mineworkers (NUM).

AMCU has benefitted from the collapse of the political authority of the NUM leadership, who are widely regarded by miners as management stooges.

The strike, which grew to involve tens of thousands of workers, was attacked not only by the infamously brutal mine security but also by the NUM, which attempted to force workers to break the strike.

This provoked mistaken retaliations such as the torching of a car which led to the death of the two security guards and the killing of two police officers. This gave the government an excuse to restore ‘law and order’ (and Lonmin’s rapidly falling share price), through what is nothing less than an orchestrated massacre.

Lonmin withdrew from negotiations which had been agreed for 15 August stating that the matter would now be “in the hands of the police”.

No longer able to rely on containing the workers through the NUM leaders, the bosses resorted to brute force. By drowning this uprising in blood, the bosses may win a battle but not the war which has been brewing on Rustenburg’s platinum mines for years now.

As a result of the global economic crisis, the platinum price has fallen drastically and the bosses are desperate to make the workers pay. That is why they are resolved, with the backing of the entire ruling class, not to give an inch to the bold strike launched by the Lonmin workers.

The Rustenburg region is the world’s largest platinum ore deposit and the recent closure of shafts has alerted its tens of thousands of workers to the urgent need to fight back. In doing so, increasing numbers are turning their backs on the NUM – once one of the proudest, most militant trade unions in South Africa.

Now, the NUM – through backdoor deals with the bosses, investment companies and an alliance with the capitalist ANC government – is so discredited that its leaders only dare to address workers protected by guns, bodyguards and police armoured vehicles.

Seeking a way forward, many workers have joined AMCU, and with the NUM, backed by management, defending its turf, a tense stalemate has been established this year.

The DSM is calling on workers in both unions to demand united solidarity action, beginning with a local general strike, involving all the platinum shafts and the bitterly poor local working class communities.

We also call for a national general strike to end the shooting of striking workers, and for a campaign of rolling mass action for the nationalisation of the mines under workers’ control and management.

We appeal internationally for protests to be sent to the Lonmin head office in London and to South African missions in your countries, and to picket South African embassies and consulates where possible.

Please send copies of all protests to the Democratic Socialist Movement: [email protected]

“Last Saturday (18 August) the DSM held a solidarity rally of 200 workers outside the shaft (mine) at Marikana. There we met a group of women (wives of strikers) who were protesting, demanding to be let in as there are scores of miners unaccounted for. In this area people can just disappear and you wouldn’t know.

They told us that they had received a text message from miners inside the shaft saying they are being held by mine security and tortured! The mine security wouldn’t allow the women into the shaft to look for their men.

We then marched with the women to the mine hospital. They were stopped outside by police who didn’t want any filming. The women wanted a list of people who were in the hospital. A huge argument developed between the women and the police. At that point mine security appeared – rifles in hand. It was like taking a step back to 1994 (apartheid) South Africa.”