Lobby the TUC on 9 September: Demand a 24-hour strike against austerity

Bob Crow, General Secretary, RMT, will be speaking at the lobby. Photo Sujeeth

By most estimates, 80% to 85% of the Con-Dem cuts are still to come. But the so-called ‘easier’ cuts have been devastating. Since Osborne’s original autumn statement in October 2010 – only 20 months ago – some 400,000 public sector workers have lost their jobs, tuition fees have been trebled and EMA student payments abolished.

Benefits have been slashed vindictively, including those of disabled people and the young, who now have to wait ten additional years for full housing benefit. Fewer students have applied for university places and many are unable to afford private rents or house prices. Tory threats to council housing will massively aggravate this.

Mark Serwotka, General Secretary, PCS, will be speaking at the NSSN lobby of the TUC photo by Suzanne Beishon

Add to this the four-year pay freeze in the public sector. In the private sector ‘precarious’ employment increases with the scourge of zero-hours contracts – in work but not necessarily paid. The imposition of the pension ‘deal’ in large parts of the public sector has exacerbated the situation with increased contributions meaning an effective pay cut with the promise of working longer for worse retirement benefits.

NSSN lobby of the TUC in Brighton

Lobby the TUC to call a 24 hour general strike!

March together against austerity on 20 October – then strike together!

This is the real position facing working class people in Britain and is the basis for the reported booing of Prime Minister David Cameron every time he appeared on the big screens at an Olympic event. He and his split and divided government will not be able to absorb reflected glory from the gold medals won by Team GB.

In fact the rash of disputes this year, including important victories for the sparks in the construction industry and London bus workers who secured an Olympic bonus, has revealed the huge potential that exists for building a mass movement capable of defeating this government.

The Trades Union Congress (TUC) conference in Brighton from 9 September should therefore provide a way to build that movement and a balance sheet for the first phase of resistance to the Con-Dem cuts. This included the largest trade union-led demonstration in this country’s history on 26 March 2011, as well as the fantastic 30 November (N30) strike – arguably the biggest single day of strike action since the 1926 general strike.

Leaders like Brendan Barber from the TUC and Unison general secretary Dave Prentis must not be allowed to re-write history. The real lesson from the pension struggle is that the two million-strong N30 strike opened up the possibility of building a force capable of defeating this government. But this would have required escalation and widening it to include the plethora of disputes that opened up in 2012 in the private sector.

But the betrayal of the pension dispute just three weeks after N30 meant that unity across the striking unions and momentum was lost. For much of this year, militant unions like the civil service union PCS, with Socialist Party members in leading positions, have looked to push the movement forward. The strike of 400,000 workers on 10 May, which saw workers in the PCS, Unite, UCU, Nipsa, ISU, RMT unions, along with POA members in prisons taking unofficial action, was more than a necessary act of defiance as the government imposed the first year’s increased pension contributions. It was an investment for the type of coordinated action that will be posed over the next few months.

The Socialist Party welcomes the TUC’s decision to call another day of demonstration against Cameron’s austerity programme on 20 October in London, Glasgow and Belfast. We will do all we can to ensure that a million are out on the streets – more than on 26 March 2011.

We call on the TUC to propose a clear slogan against austerity for the demo. But we also have a responsibility to argue that this alone will not be sufficient to force the Con-Dems back, despite their splits and weaknesses.

It’s also necessary to warn that any strategy of the right-wing union leaders that action should be subordinated to a ‘wait for a Labour government’ must be challenged. After all, Labour leader Ed Miliband agrees with the necessity for cuts – just not so far and fast. In reality, in office his position would be determined by the bond markets and the needs of British capitalism. In fact, a confident trade union movement that has defeated this government would be in the best position to put mass pressure on an incoming Labour government. 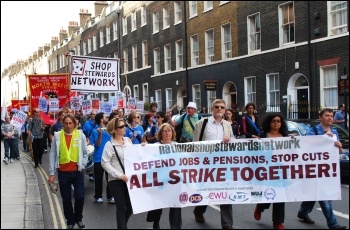 We therefore fully support the lobby initiated by the National Shop Stewards Network to call on the TUC to follow up the 20 October demonstration with a 24-hour general strike. The lobby will promote motions from the PCS and the POA which push for further coordinated strike action.

The POA motion calls on the conference to consider “the practicalities of a general strike”. If these motions were passed it would put pressure on the TUC and the leaders of the big unions but also build the confidence of workers in the run up to 20 October.

Some of these leaders may argue that the demand for a 24-hour general strike against austerity is abstract and in any case wouldn’t be possible under Thatcher’s anti-union laws. But as with the pension dispute which reached its highpoint on N30, effectively a public sector general strike, it is possible to coordinate strike action against austerity on a scale of millions. One of the main reasons that the pension attack was chosen as a focus for action in the first place was because it gave the maximum potential for joint strike action.

Many unions have not accepted the pension deal and are therefore in a live dispute. As well as the PCS, UCU and the NUT this also includes Unison in Higher Education. But in any case, at Unison conference, in an attempt to draw a line under the pension dispute, Prentis flagged up pay as the next battle. Learning from the betrayal of the pension dispute we have to fight to make sure there is a serious battle on pay that is fought through to victory.

All public sector unions should be balloted on pay. Unison’s own Higher Education sector executive has agreed to ballot for strike action just before the TUC demonstration and at the end of November, possibly to link up with the NUS student demonstration.

This opens up the prospect of coordinated strike action throughout the public sector on pay and pensions. If a call was then made to workers in the private sector to coordinate any live disputes or planned ballots with this, the prospect of a one-day general strike can be concretely posed.

The anger and frustration against this government is almost palpable. It goes beyond the trade union movement and the working class. The Libor scandal has angered many small business people who have been penalised as a result. The strike rallies and demonstrations in towns and cities up and down the country on N30 were often the biggest these places had ever seen.

This was because the unions were seen as the organised expression of the opposition needed against cuts and the most likely to succeed because of its strength. The first stage of the cuts has only emphasised the necessity of building this resistance.

I’m lobbying the TUC on 9 September

To show support for the low-paid women workers in Unison at my school who face the prospect of looking after children as young as four until they’re 70 and who voted unanimously to reject the pension proposals at our recent union meeting. These workers should not have to accept a pay freeze or cuts to their pensions just because they care. They need the TUC to call for action to both defend and improve their working conditions.

Because despite having two part-time jobs I’m still struggling to feed, clothe and house my family. Life should be about more than just survival; the money and the resources are there, but in the hands of a tiny minority. This government is intent on making life as difficult as they can for millions of people in this country and I want the TUC to take the initiative in a fightback against them.

Because the Unison leadership, with their big salaries, paid for by their members, are refusing to listen to our anger and frustration at their lack of action. We demand that they call a 24-hour strike as the beginning of a campaign to fight against all cuts.