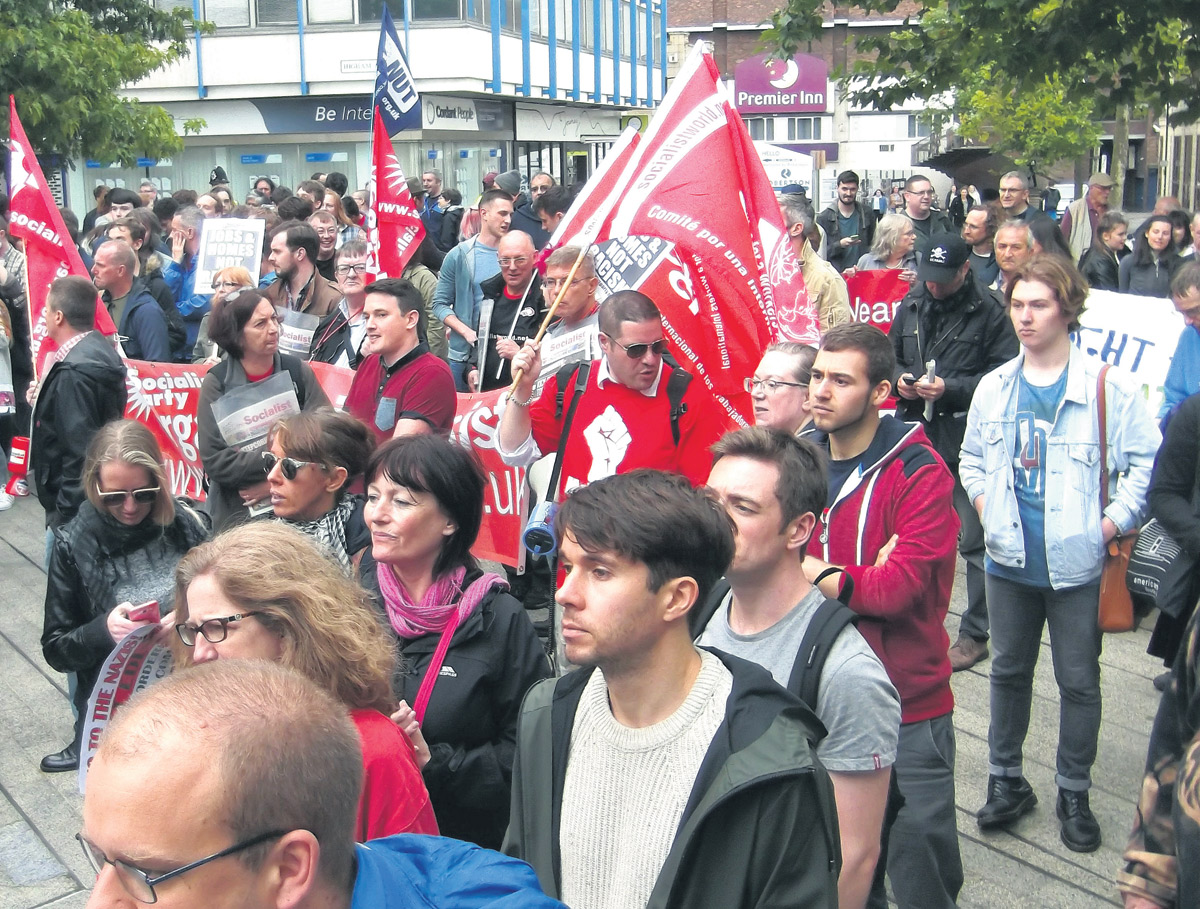 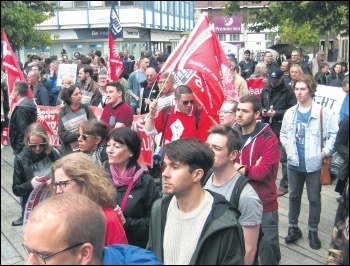 Socialist Party members defied a sectarian ban to march against the far right in Newcastle, 24.9.16, photo by Nick Fray   (Click to enlarge: opens in new window)

The reason for NU’s ban is based on material, in the most part, taken from the social media of the local far-right British National Party (BNP) organiser, who NU acknowledge, “has a history of spreading lies and rumours.” Our member, who in the past was on the periphery of the BNP, has dropped any illusions he had in them and completely repudiates their racist and reactionary ideas.

The handful of NU organisers who met with us to discuss this issue were dominated by Socialist Workers Party and Labour Party members. From the onset it was clear that nothing our member said would be enough to persuade them that he utterly rejects the far right. Indeed, we repeatedly asked what he could do to convince them – they never answered this question.

As we assembled at the beginning of the counter-demo we were approached by trade unionists, other left groups and individuals who were angered by NU’s attempts to ban us, and pleased to see we were boldly participating. We have also received a lot of support on social media. NU’s attempts to smear us and exclude us from its activities have clearly backfired.

The Socialist Party has a proud track record of fighting racism and fascism. Nationally this includes the Socialist Party, through our involvement in YRE (Youth against Racism in Europe), organising the biggest European-wide demonstration against racism and the far-right in Brussels. We also organised mass demos as part of the campaign which closed the BNP’s HQ in Welling, south London.

Our members recently initiated a counter-demo and rally against the far right in Byker, which the person in question played a central role in organising. This rally was addressed by trade unionists, community activists, students and others opposing the far right. It should be noted that initially the NU position appeared to be to let the fascist demo in Byker go unopposed – which is why we stepped in and organised.

The Socialist Party has always had a different approach to fighting racism and fascism from Newcastle Unites. We believe that it’s not enough to simply condemn the far right’s racism and nationalism.

To cut across the growth of the far right in working class communities the left must link the struggle against racism to the fight against the worsening social conditions under capitalism – unemployment, zero-hour contracts, low pay, housing shortages and failing public services, etc. Socialists can only effectively cut across racism by simultaneously fighting against austerity.

If social media had been around, some of Ricky’s views from that period may have reflected badly on him. However, Ricky’s subsequent role as a trade union activist, which led to his imprisonment as a Shrewsbury picket, highlights how such a political journey, away from the poison of the far-right, is possible.