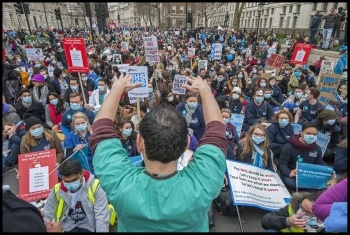 The National Health Service is "now at breaking point." This is the warning from Chris Hopson, chief executive of NHS Providers.

There's a shortage of 20,000 NHS nurses. Pressure on staff means tired health workers, threatening patient safety. With one in three nurses aged over 50, many may retire over the coming years and shortages will grow. But instead of helping to recruit more the Tories have scrapped bursaries for student nurses, making them pay for their training!

Newly qualified junior doctors look after up to 100 patients. One said: "We don't have time to review patients. [I am] constantly fighting fires, covering three people's jobs, so I never have time to think about a patient properly." Yet the government is forcing them onto a new contract, making them work even harder.

One in ten hospital beds are occupied by patients who can't be released because of cuts to social care. This means operations are cancelled, causing patients to be seen in private hospitals, costing the NHS.

Yet patients are already struggling to get appointments. Many end up in hospital A&E departments, suffering long waits. This will only get worse as we go into winter.

What's the Tory answer to this crisis? More cuts! Theresa May says there'll be no additional NHS funding and Health Secretary Jeremy Hunt is demanding £22 billion in 'efficiency savings' (ie cuts) by 2020.

Action is needed to save our NHS. The trade unions must coordinate widespread industrial action of health and other workers under attack. A national demonstration of unions and community activists to defend the NHS would have mass support. If followed by a 24-hour general strike, the Tories could be brought down - a first step to saving the NHS!