Gig economy exploitation can be beaten... 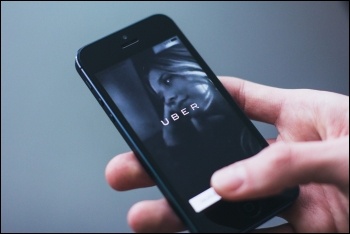 Those working in the 'gig economy' will be over the moon at the recent victory of Uber drivers.

Two workers, backed by general union GMB, took the transport firm to employment tribunal to prove they were actually employed by it. Because shockingly, Uber has been claiming its drivers are 'self-employed', meaning it has no legal responsibility to pay the minimum wage or grant decent holiday and sick leave.

This is bogus self-employment. It is one of employers' favourite tricks to avoid even the limited workers' rights the law provides.

A summer of strikes in the sector and a wave of unionisation of low-paid workers have put a lot of pressure on the bosses. Partly as a result, the judge made a scathing verbal attack on the rise in this form of exploitation, stating: "The notion that Uber in London is a mosaic of 30,000 small businesses linked by a common 'platform' is to our minds faintly ridiculous." 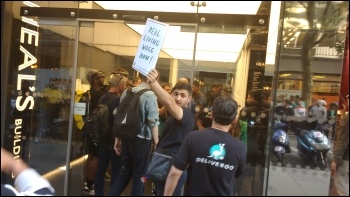 The Ritzy cinema workers in south London are back on their picket lines fighting for a living wage, after bosses refused to take seriously their pledge of negotiations after the last round of strikes. Deliveroo drivers recently won a big victory against changes to their contracts which would have slashed their pay, also by striking.

These workers are some of the most exploited. But they are also finding their voice to fight back.

These industrial battles must continue, backed by unionising more low-paid, precarious and unorganised workforces to join them. Trade unions have a double role: they can ensure existing workers' rights are respected, and can fight for a better deal too.

But we also need a political voice. Jeremy Corbyn won huge support by calling for ending zero-hour contracts, introducing a £10 an hour minimum wage, and scrapping restrictions on trade unions.

To make these demands a reality, Corbyn must lead the fight to get the Blairites out of Labour. We need a mass workers' party opposed to austerity, to fight for an end to bogus self-employment and the exploitative practices gig economy.