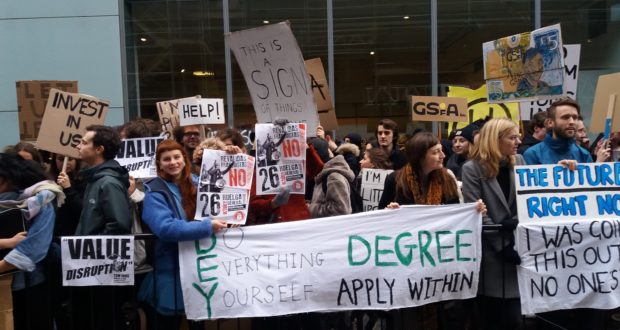 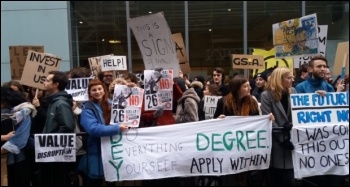 Several hundred students boycotted classes and organised a mass picket right in the middle of an open day at the Glasgow School of Art (GSA) on 27 October. They were motivated by anger against cuts and demanding more facilities to “let us learn”.

A fire in 2014 destroyed a large part of the campus and management have failed to invest and respond to the reduced space for students effectively. Placards and chants highlighted that many students are paying high fees of “£50 a day”.

One student, Euan, spoke to the Socialist: “GSA are saying they will bring in 25% more students but we are already ‘hot-desking’, there is no space. We have tried every form of dialogue and this was the only option left, the turnout today shows them we are serious. We want change.”

Other students explained that they couldn’t get access to material or technicians despite the college’s renowned reputation.

GSA management, reflecting their panicked embarrassment at their open day being overshadowed by the creative protest powers of their own students, screamed at picketers to stay off the roads in front of the media cameras and tried to stop students being interviewed. As the protest grew they put up steel barriers around the picket, students responded by chanting “Glasgow School of Barriers!”

Mass meetings should be called of the GSA student body to discuss and debate the next course of mass action. The class boycott was an important tactic that should be repeated to achieve the widest possible participation of students. Occupation should also be seriously considered. Building links with trade unions on campus is also vital.

Socialist Students in Glasgow mobilised support from the wider trade union movement. On the same day we were involved in a protest with Glasgow City Unison at the grand lavish opening of the new Glasgow City College campus. These struggles should be brought together.

Socialist Students offers these ideas from our experience of participation of student struggles and hopes to be part of a discussion with GSA students about the way forward. We raised solidarity with the GSA protest through our links to the Sindicato de Estudiantes, the Spanish students union which organised a general student strike of 2 million the day before and with the outsourcing/fees must fall movement in South Africa.

GSA students should be commended for organising the largest campus student demonstrations in Scotland since protests in 2011. What they have done should be an example – if a fighting lead is shown then students will fight to improve their conditions.