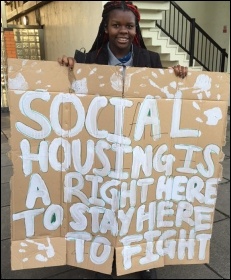 Councils have spent a disgraceful £3.5 billion in the last five years keeping homeless vulnerable families in temporary accommodation according to figures obtained by the BBC.

A million houses are needed to tackle the housing crisis. At £100,000 a house, the amount councils have spent could have built 35,000 homes which would last for decades.

The millions, possibly billions by now, put aside from the sale of council houses over the past 30 years is ring-fenced - but cannot be spent. How can this be in the present homes crisis?

Homelessness in Britain is alarmingly high. 120,000 children will be homeless this Christmas. They'll be in hostels, bed-and-breakfasts or private lets. No security, no peace, very little privacy, not even a toilet for each family.

The law in the UK means that a person is only statutory homeless if they are vulnerable in some way, for example because there's children in the family, or severe disability.

But even that is no guarantee of being accepted. A court in Manchester decided that a man without legs was not vulnerable, because he was born without legs so was used to it!

Apparently Buckingham Palace needs some upkeep, at a cost of £369 million.

Now this modest home for the queen and her hangers-on has 775 rooms. That should be enough to satisfy anyone, but apparently not. The government (in other words, we) bought her another little castle for her 90th birthday.

This is unbelievable. We've had the mantra of austerity drummed in our ears since 2010, when the Tories, first aided and abetted by the Lib Dems, then on their own since 2015, have savagely attacked the standard of living for vast swathes of folk.

They have increased council and housing association rents at the same time as capping housing benefit, forcing families into arrears and homelessness.

Let's campaign to make Labour a mass workers' party with socialist policies and kick them out! And Jeremy Corbyn should join our call for Labour councils to refuse to implement cuts, and start a mass council house building programme.