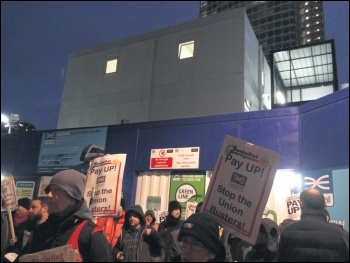 From 5 December, Terry Wilson was set to be off Crossrail, in a blatant attempt to intimidate workers, just as Unite starts a consultative ballot on the bonus payment and other demands.

As a result of this victimisation, on 30 November and 1 December electricians 'cabined up' and refused to start work. Then on 2 December, they picketed the site. Following this, workers were issued with a letter from Laing O'Rourke, 'encouraging' them back to work by threatening disciplinary action!

It is crucial that this dispute is won. And it can be - not just for the Tottenham Court Road site but the whole campaign across Crossrail. A victory here would really build confidence that they could force Crossrail management to concede the bonus.