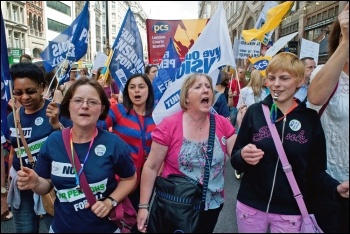 Almost from the time a child starts school, they are subjected to a never-ending regime of examinations. This not only impacts on the child, but on the school and the individual teacher, and most importantly on the quality of education.

The costs of these formal tests and exams are a drain on school budgets, with private companies, like Pearson, making huge profits from our education system. Constant switching between exam boards creates huge workloads for teachers, rewriting schemes of work.

Even the Institute of Directors uses this term. Their report in April stated that "this study raises serious concerns that UK education policy is turning our schools into exam factories, squeezing out creativity and the joy of learning at a time when these very attributes are becoming increasingly important."

With teachers subjected to performance-related pay, it is obvious that 'teaching to the test' impacts on the curriculum young people experience. Music, art and drama are being marginalised.

Teachers have always used testing as part of the assessment of their pupils, but it is only one of the tools we use. The increase in the use of publicly reported testing and exams from children as young as seven is more to do with control than good education.

Well, the simple answer is no. Teachers want to ensure all their pupils can achieve their full potential, whatever their ability. High-stakes testing inevitably means some pupils are more 'important' than others. Children with special educational needs, and those more able, can often be sidelined.

'Pisa', which looks at the quality of education worldwide, has consistently shown that Finnish children perform well. This is in a country where there are no school inspectors, no league tables, and no exams until the age of 16.

In Germany, while they have introduced national tests, there are no performance league tables and schools are not penalised for poor results.

Of course, parents want to ensure there is accountability. But a recent Ipsos Mori poll on who people trust put teachers on 88%, second only to doctors and nurses - while politicians, who make the decisions about our education system, came in at 15%.

Parents are becoming increasingly uneasy about the level of testing. Campaigns such as 'Children are More than a Score' are gaining wider support for ending Sats.

We need a huge overhaul of education, led by education professionals. We need to rid our system of the present national curriculum, along with Ofsted inspections, Sats and league tables.

Our immediate demands should include a flexible curriculum with more practical learning. It must be a broad and balanced curriculum, with time for the arts, music and more pupil-led innovation, as well as a wide pastoral curriculum including health and sex education for all.

Diagnostic testing and moderated teacher assessment should be at the discretion of the teachers. But a socialist education system would be based on individual and group learning and attainment rather than exams.