From The Socialist newspaper, 28 February 2017 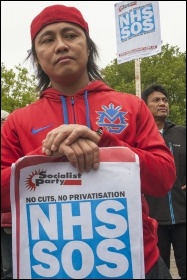 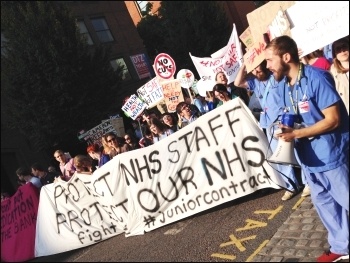 As we all know, our health service is already in a critical condition - driven to breaking point by cuts, closures and privatisation. The national demonstration on 4 March is an important step forward in the battle to save it.

Now we need to use it as a springboard to build a massive movement that can defeat the Tory government's attempt to finish off the NHS.

The government is driving to cut £22 billion from the NHS by 2020, on top of the £15 billion cut last parliament. They are attempting to cover up these latest cuts by hiding them under the guise of 'sustainability and transformation plans' (STPs).

We have to expose the con - STPs are about nothing more than slashing, trashing and privatising our NHS. The King's Fund think-tank has already said two-thirds of all STP plans will involve cuts and closures of hospitals.

But the Tories are weak and can be beaten. Unelected as prime minister - with a wafer-thin majority in parliament - Theresa May could find the STPs are her 'poll tax'.

Her role model, Maggie Thatcher, was thrown out of office along with her hated poll tax, after 18 million refused to pay it. This movement was led by the Socialist Party (then called Militant).

The anti-poll tax movement brought together wide sections of working class and middle class people, in rural as well as urban areas. The same potential exists for a movement in defence of our NHS. 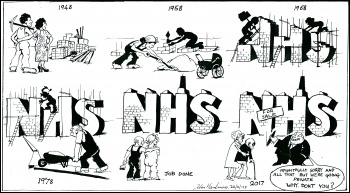 We should build 44 massive local demonstrations on the same day to stamp on the STPs! That should be followed by a Trade Union Congress (TUC) national demonstration to save the NHS - mobilised for by all trade unions and by the Labour leadership.

Labour can play a vital role in building this movement. It is good that Jeremy Corbyn plans to address the demo. Now he should use his position as Labour leader to campaign for a mass movement to renationalise the NHS.

Such a stand would help give people confidence to fight back, and make clear to millions the advantages of an anti-austerity Labour leader.

Jeremy should also call on the 100 or so Labour-led councils to stop making cuts now, including cuts to social care, and to reject their local STP; STPs include local authorities. So far a handful has done so, but if every Labour council was to publicly oppose its local STP, the whole thing would become unworkable.

The heroic strike action taken by junior doctors, who had huge popular support, gave a glimpse of the possibility of striking to defend the NHS. Unfortunately, the TUC and the leaders of the other health unions did not organise the necessary solidarity action in support of the doctors' stand.

The 4 March demonstration has been backed by the major health trade unions - in the case of Unison, the largest health union, as a result of sustained pressure from its members. But that is only a beginning of what is needed.

As well as helping to build demonstrations and community campaigns to save our NHS, which can raise the confidence of health workers, health trade unions need to prepare to organise coordinated strikes to break the pay freeze and stop the huge cuts and closures. Occupations to stop closures can also play an important role.

The Socialist Party calls for a comprehensive, high-quality NHS, under democratic control, with care free at the point of use. To do this we need to take all elements of the health service into public ownership, to stop private companies profiting from our ill health.

We need to reverse the Tory privatisation drive, and scrap the 'private finance initiative' and all other forms of privatisation that New Labour expanded massively when it was in government. The outsourced 'independent sector treatment centres' should be brought back under NHS ownership and control.

At the same time, the social care sector should be brought into democratic public ownership and properly funded. The pharmaceutical companies that make billions from our ill health should also be nationalised. Pharmaceutical products currently cost the NHS in England about 13% of its budget annually, about £16 billion.