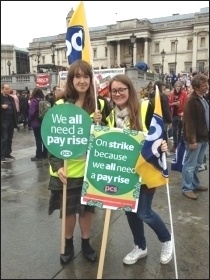 PCS, is calling on members to turn 31 March into a day of protest against the pay cap.

Theresa May said she is looking after the 'just about managing'. Well, thousands of the government's own workers, our members, are not at all managing. We say 'scrap the cap'!

For government employees, PCS commissioned research shows the value of average earnings has fallen by 8% since 2010, a figure which will increase to 20% by the end of the decade.

Last year's TUC conference committed the TUC to back and coordinate action against the pay cap. PCS has called upon the TUC to implement this policy.

The PCS union's Left Unity leadership will also be seeking to directly build coordinated action with other public sector unions to bust the pay cap.

This is a call that should be taken up by rank-and-file left groups in all public sector unions. Build coordinated action across the public sector to defeat the pay cap.

PCS members should join the protests. Other public sector workers should also get involved - details of events organised, and an online petition, can be found on the PCS website.