Link to this page: https://www.socialistparty.org.uk/articles/25311 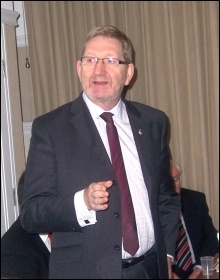 The Socialist Party welcomes the re-election of Len McCluskey as General Secretary of Unite. His victory over Gerard Coyne is a defeat for the Tories and the capitalist establishment as well as the Blairites within Labour. They moved heaven and earth in the Tory media, with Coyne disgracefully using the Murdoch press, even including the hated Sun.

They regarded this election as the platform for another attempt to unseat Jeremy Corbyn as Labour leader, to open the way to seize back the leadership of the party. But this result, coming at the beginning of the General Election campaign, will give a major boost to all those forces who want to push Corbyn into government on a pro-worker, anti-austerity programme.

We call on Len, with this renewed mandate, to put himself and the union at the helm of Labour's election team alongside Jeremy and John McDonnell.

This Unite election has shown the role of the mass media and it can only be defeated in the next seven weeks if there is a mass campaign of meetings, rallies and demonstrations - mobilising around a socialist programme against this austerity government of not merely the 1% but the 0.1% super-rich.

A Coyne election would have also been the signal to attempt to move the union back into the dark days of partnership with the bosses. We believe that the closeness of the result (see below) shows that the candidature of Ian Allinson was an unnecessary risk that threatened to let in Coyne through splitting the left vote.

Four Socialist Party members are standing on the United Left slate in the Unite Executive elections, which will be counted in the next few days. If elected, their presence on the Executive will be essential in ensuring that the union continues to act in a militant manner politically and industrially.

This version of this article was first posted on the Socialist Party website on 21 April 2017 and may vary slightly from the version subsequently printed in The Socialist.