Editorial of the Socialist, issue 948 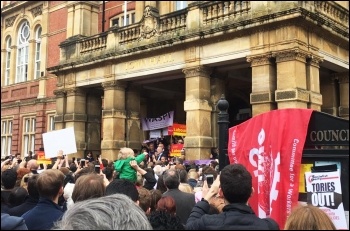 Socialist Party members join others at a rally for Jeremy Corbyn in Leamington - these rallies show the potential to build mass support, photo by Lenny Shail   (Click to enlarge)

The results of the 4 May county council and metro mayor elections will have disappointed many supporters of Jeremy Corbyn. They must act to sound the alarm - Jeremy Corbyn can win this election but only with a bold, mass campaign. There is no room for hesitation or compromise - if the Tories are to be defeated on 8 June, a left programme for measures to improve living standards for working and middle class people must be got out to the majority.

Labour lost 383 council seats, while the Tories gained 563 and won four of the six 'metro mayor' positions. With the general election less than a month away, this is not a good result for Labour. However, behind the headlines of the Corbyn-hating press, these results are also not as good for the Tories as May would have hoped. Clearly, particularly given the low turnout in these elections, there is no direct correlation between them and a general election.

However, even if this result was simply repeated on 8 June it would give May a modest increase in the Tory majority - estimated at around 20 more seats - not the landslide that the capitalist media are predicting. Among the small minority of the electorate who voted, the main trend was a polarisation between the Tory and Labour vote. This was added to by the collapse of Ukip, which was left with only one council seat and its vote share reduced from 22% to less than 5% in four years. At the same time, the predicted Lib Dem surge didn't materialise. They lost 42 seats and even the unreliable projections of what these results may mean in the general election predict an increase of just three parliamentary seats for the Lib Dems (bringing them to a grand total of eleven).

Labour should have been able to gain in this situation. So why didn't they? May's nauseating repetition of her and the Tories being the "strong and stable" hands needed to carry out Brexit negotiations has clearly had an effect on a layer of people. Leading Tories are trying to emphasise the idea that they are ready and willing to do 'full battle' with the EU.

But not in the defence of workers' interests! May was a Remain campaigner in the EU referendum because she recognised the importance of the EU for the interests of capitalism. Big business is hoping she will use an increased majority to implement as soft a Brexit as she can get away with within the context of the divided Tory party. What is certain is that any Brexit she and the Tories negotiate will be 100% opposed to the interests of the working class.

Unfortunately Corbyn's position on Brexit is not clear to the working class. This stems from his mistaken decision - under pressure from the Labour right, as well as some on the left - to back Remain during the referendum campaign, despite his historic position of left opposition to the neoliberal EU. Since the vote he has been quiet, giving the impression of trying to avoid the issue, aiding the Tories' portrayal of him as indecisive and weak.

This can still be overcome, but only by being clear, loud and unashamed in saying that a Corbyn-led government would carry through a Brexit in the interests of the working class. A workers' Brexit would mean jobs, homes, services and decent pay for all as opposed to the Tories' Brexit, which will inevitably mean the rich continue to prosper and the rest suffer. It would also be an internationalist and anti-racist Brexit, defending the rights of EU citizens living in Britain.

Another big factor in these local election results was the policy of local politicians. Local areas have been devastated by cuts to council jobs, closures of libraries and children's centres, cuts to benefits and privatisation of vital services and of council housing. Blairite Labour politicians have carried through such attacks and found themselves punished at the ballot box. Unfortunately, in a vain attempt to compromise with Labour's pro-capitalist right, Jeremy Corbyn has not clearly opposed local Labour cuts.

Despite this, Corbyn's policies are potentially enormously popular. As we have outlined in the last few issues of the Socialist, Corbyn has made very good policy statements on things like increasing the minimum wage, building council homes, lifting the public sector pay cap and so on. But, given the sabotage by the right of his own party, as well as the press, this message will not get out to enough people if he plays by the rules of conventional electioneering.

Corbyn and McDonnell should call mass rallies in every town. Figures show there has been a surge in voter registration by students, the majority of who support Jeremy Corbyn and his free education pledge. Corbyn should seize on this and call a speaking tour of universities. During the EU referendum campaign, a number of trade unions poured the full weight of their resources behind getting the Remain vote out from their members. Some union members were receiving almost a phone call every day telling them how to vote! Where is the same effort to back Corbyn now? The left trade union leaders should place themselves firmly at the head of the campaign to win workers over to Corbyn's programme.

There is no time to lose. The next four weeks must see the full weight of workers, trade unions, students, NHS activists, and all those fighting back, being thrown behind the effort to kick out the hated Tories and win a Corbyn-led government on a socialist programme.