Link to this page: https://www.socialistparty.org.uk/articles/25510 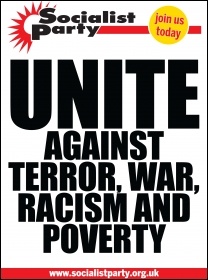 Young people out enjoying themselves were instead faced with one of the worst kinds of horror imaginable on 22 May when a bomb was exploded in the foyer of the 21,000-capacity Manchester Arena. Twenty two people were killed and at least 59 injured by this blast at the end of a concert by US singer Ariana Grande.

This atrocity, which the Socialist Party completely condemns, has echoes of the Bataclan concert attack in Paris in November 2015. In both, ordinary people from all walks of life were indiscriminately slaughtered, especially the young.

Early reports suggested the perpetrator was a suicide bomber who died at the scene. It is the worst terrorist attack in Britain since 52 people were killed in the July 2005 London bombings.

Manchester people reacted quickly to aid those fleeing the scene, tweeting offers of beds and lifts home, and taxi drivers gave free rides. Their response of solidarity and help - together with that of the emergency and hospital workers - has nothing in common with the hypocritical reaction of Tory government ministers who profess sympathy and sorrow while they stand four-square behind policies that lay down the breeding ground for such atrocities.

Terrorist attacks in European cities are becoming more frequent. In Britain, coming this time outside London, people throughout the country will now feel less safe. The reasons behind the attacks often appear to be multi-faceted and no two incidences are exactly the same. But a running feature has been links or ideological sympathy with the likes of Isis and anger at western imperialist interventions in the Middle East.

So as well as opposing reactionary organisations like Isis which support and perpetrate barbaric acts on ordinary people, it's essential to oppose imperialist wars and call for the immediate withdrawal of British military forces from the Middle East. We must also build unity of working people against scapegoating, racism and division, and argue for socialist ideas as the only alternative to this present system that can't and won't end poverty, war and terrorism. 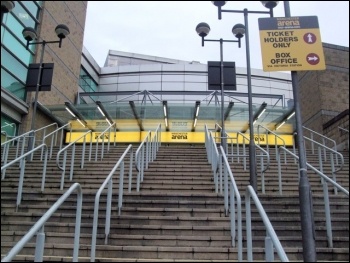 Following the Manchester atrocity Theresa May will no doubt try to double and treble her 'strong and stable' posturing in order to appear as a firm 'anti-terrorist' law enforcer and boost her election prospects. However, there have been a number of rounds of so-called anti-terror legislation over the last two decades, and none of it is preventing new attacks such as March's killings in Westminster or this latest terrible event in Manchester - as the Socialist Party has repeatedly warned would be the case.

At the same time the Tories' unrelenting austerity drive is making people more vulnerable when attacks occur. After the Westminster attack we drew attention to the way in which cuts to the emergency services, hospitals and transport staff will inevitably reduce the speed of assistance for those needing urgent help.

It has been reported that eight hospitals in Greater Manchester have treated casualties of the bombing, while at the same time it's the case that some of these hospitals are facing cuts in which the loss of 24-hour emergency cover is being considered. The Manchester Arena attack, taking place in the late evening, exposes the potentially disastrous nature of such cuts, which the Tories want to push ahead with.

During the general election campaign so far the Tories' determination to continue with callous austerity measures has been clear and they met a major backlash to their plans to further penalise people who depend on social care. Now, following the Manchester attack, their self-portrayal as the defenders of ordinary working people needs to be further exposed and rejected in all its guises.

The 2004 Madrid train bombings in Spain, in which 191 people died, took place during a general election campaign and the ruling Popular Party tried to use the atrocities to boost their election prospects. Their strategy backfired; mass anger was directed at them after they tried to blame Basque nationalists for the attacks. Rather, it became clear that the perpetrators were acting in sympathy with Al-Qaida, and the mood of revulsion towards the government and its pro-Iraq war position led to the Spanish Socialist Party winning that election.

While it was a particular blunder by the Popular Party that helped to fuel that outcome, in Britain's present general election campaign Jeremy Corbyn's anti-war stance can gain even more resonance and have a strong impact. Corbyn has long been a consistent opponent of intervention by Britain and other western capitalist powers in the Afghanistan, Iraq, Libya and Syria wars. These have caused mass devastation and loss of life and have created the conditions for a horrific level of terrorist violence in those countries and beyond.

We in the Socialist Party have also strongly opposed those wars and have consistently warned that it would be ordinary working people in the Middle East and worldwide who will pay the price of them, both financially and as a result of the escalating instability they have caused.

At the same time we condemn (as does Corbyn) the ideology and abhorrent methods of right-wing reactionary organisations like Isis and Al-Qaida that seek to build a highly repressive semi-feudal and capitalist caliphate, with no workers' democracy or basic rights.

It is the task of the working class in Iraq and Syria, through building trade unions, democratically-run non-sectarian defence bodies, etc, to lead a struggle against the likes of Isis, assisted by solidarity from workers internationally. The imperialist powers, on their part, are intervening for their own prestige and influence and in the interests of their top corporations.

This includes British imperialism, whether represented by the Tories or the Blairites before them. It was a fitting coincidence that the Guardian's 'morning briefing' following the Manchester Arena attack, after beginning on the bombing, immediately followed it with a second section on the "unprecedented support for the fossil fuel industry" in the Tory election manifesto. Oil industry bosses have promised over £390,000 to May's campaign as a result, it explained.

The general election on 8 June provides a much-needed opportunity to kick the Tories out and take forward the struggle in the labour movement against the Blairites by bringing Jeremy Corbyn in as prime minister. This would be a very important step on the road towards ending the austerity, poverty and war inherent in capitalism, that underlies division, racism and terrorism.

This version of this article was first posted on the Socialist Party website on 23 May 2017 and may vary slightly from the version subsequently printed in The Socialist.