Socialist Party members have been organising safety campaigns up and down the country. 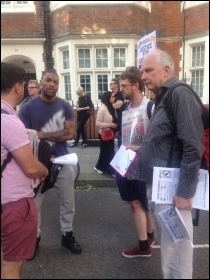 West London Socialist Party's campaign work on Grenfell, in our branch area, again received a friendly response. Increased sales of the Socialist, petition signatures, good donations to our fighting fund by people who had already given generously to help the Grenfell residents directly.

In the 1960s in the same area, the action of private landlords provoked big protests. Landlords were typified by Peter Rachman, who sent teams of thugs with dogs to force tenants out and push the rent up for the next tenants.

We had to set up barbed wire around their flats and organise all-night picket patrols to protect them. We have to ensure tenants' struggles are not forgotten this time.

I was with Socialist Party members local to Grenfell Tower on 17 June at Portobello Road Market campaigning for justice for Grenfell (see some of our demands). We were thanked, people gave us thumbs up, and our campaign stall was regularly mobbed. As well as angry passers-by grabbing leaflets, over 30 people bought copies of the Socialist.

Here in Coventry, WM Housing has revealed that just two of its 24 tower blocks have a sprinkler system installed - with only another two scheduled for installation.

Living in one of their tower blocks myself I noticed they quickly put up fire safety notices a couple of days after the Grenfell fire. Socialist Party members in Coventry are working towards a local housing safety campaign, initially with a petition and a plan for a public meeting.

We started an initiative called 'Ashmole ASAP' on 26 June, calling for improvements to make the two tower blocks on the Ashmole estate in Oval, south London - including my own home - 'As Safe As Possible, As Soon As Possible'.

We're using the slogan "we deserve the right to sleep safe at night." Letters signed by tenants asking for communal alarms, sprinklers and fire brigade safety checks, among other things, will go to our housing association Metropolitan, and Lambeth borough council - with further action to follow.

Cardiff West Socialist Party has begun building a campaign with residents in two tower blocks in the Butetown docks area. None of the blocks have sprinklers. As well as a campaign stall and leaflets, we organised a street meeting outside the block. Residents attended and raised safety concerns.

We have also organised a benefit concert for Grenfell at the Gwdihŵ Café Bar, 7 July at 7.30pm. We expect up to 250 there and lots of funds to be raised in solidarity with all those touched by the disaster.

Socialist Party members and supporters of the Young Socialists campaign protested against the Tory and Blairite policies which gave rise to Grenfell on 21 June. 30 people turned up at short notice, including nine new faces.

We had people of all ages coming up to us and thanking us. They were proud we were refusing to let Grenfell be brushed under the carpet. 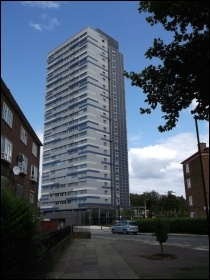 East London Socialist Party is proposing to the One Housing Tenants' Action Group in West Ham to jointly visit Ferrier Point tower block in Canning Town. The block has cladding made and fitted by the same company as Grenfell Tower.

The One Housing Tenants' Action Group recently defeated plans by their housing association to hike rent by 40%. They are planning to link up with other residents' associations fighting for lower rents and safer homes.