Link to this page: https://www.socialistparty.org.uk/articles/26117

Barts strike: "up the ante" if necessary

Twenty-four days of strike action, with bold pickets, rallies and demos, have brought greedy profiteering company Serco to the table.

The low pay and back-breaking over-work of cleaners, porters and catering staff in the NHS has been given a national platform as a result of the magnificent strike in four East London hospitals in Barts Health Trust.

Long-standing trade union activists have fought alongside migrant workers, women and men. Hundreds of workers across the Trust have joined a union for the first time.

Workers have found a new confidence in standing up to their bosses.

They have asked: how can a multibillion-pound company with millionaire executives not pay an extra 30p an hour to its essential workers - and how can an NHS trust turn a blind eye to this outrage?

When we look at the NHS we see patients, hard-working staff and a vital public service that we all value. Serco see pound signs and bulging pockets.

They have spent weeks trying to confuse and demoralise workers and to break the strike with agency workers.

The union members themselves will democratically decide what is an acceptable offer. But make no mistake - it is action that has got the campaign this far, and it is action that will be required again if workers do not like what is on the table.

The strike committee had a brilliant week of action planned for this week, of strikes, mass meetings, protests at the Trust and at Serco's HQ. That is what has made Serco talk. This plan has been suspended for the talks, but if necessary should be re-launched.

Mass meetings of members should discuss the next steps to, in the words of Unite members, "up the ante" on Serco and on the Trust.

We demand that Labour councillors and MPs make this dispute a top priority!

If not resolved, the MPs should be getting on to Serco and the Trust to end this dispute straightaway. The councillors have the power to call in the Trust and tell it to intervene and sort this out.

That's why it's important that, after pressure from campaigners, the health scrutiny committee of Waltham Forest council has asked strikers to speak at its meeting on Thursday this week. We need the same from Tower Hamlets councillors and MPs too! 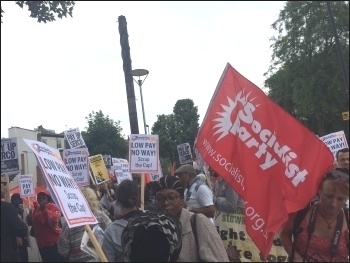 It's good that Len McCluskey, Unite general secretary, came to speak at the joint demo in August with BA cabin crew and Bank of England strikers. Barts strikers spoke at the National Shop Stewards Network (NSSN) rally at the start of TUC congress on Sunday, alongside Len McCluskey.

Unite is a big union. If members are not satisfied with what Serco offers, Unite must use its resources to do all it can to mobilise support and solidarity for the Barts strike and increase the pressure on Serco.

Serco be warned - if necessary we will campaign far and wide so that no one will touch your company. In fact - all private companies should be kicked out of the NHS!

Strikers were delighted that John McDonnell came to the July demo and passed on support from Jeremy Corbyn. If the fight has to go on, how about calling on them to visit again, and address another big meeting or protest?

Strikers are also grateful for the curry-night benefit laid on by Corbyn-supporting Labour members in Leyton and Wanstead. But they need to have a word with Walthamstow Blairite Labour MP Stella Creasy.

On the same night as the benefit, where strike leader and Barts Unite branch secretary Len Hockey was guest speaker, Creasy's Labour Party branch, while pledging support for the strike, turned Len down as a speaker. It "wouldn't be appropriate" on the basis that Len, a Socialist Party member and Corbyn-supporter, had stood in an election as part of the Trade Unionist and Socialist Coalition (TUSC) against right-wing Labour!

Another example of Labour being two parties in one. Kick out the Blairites and bring in the strikers!