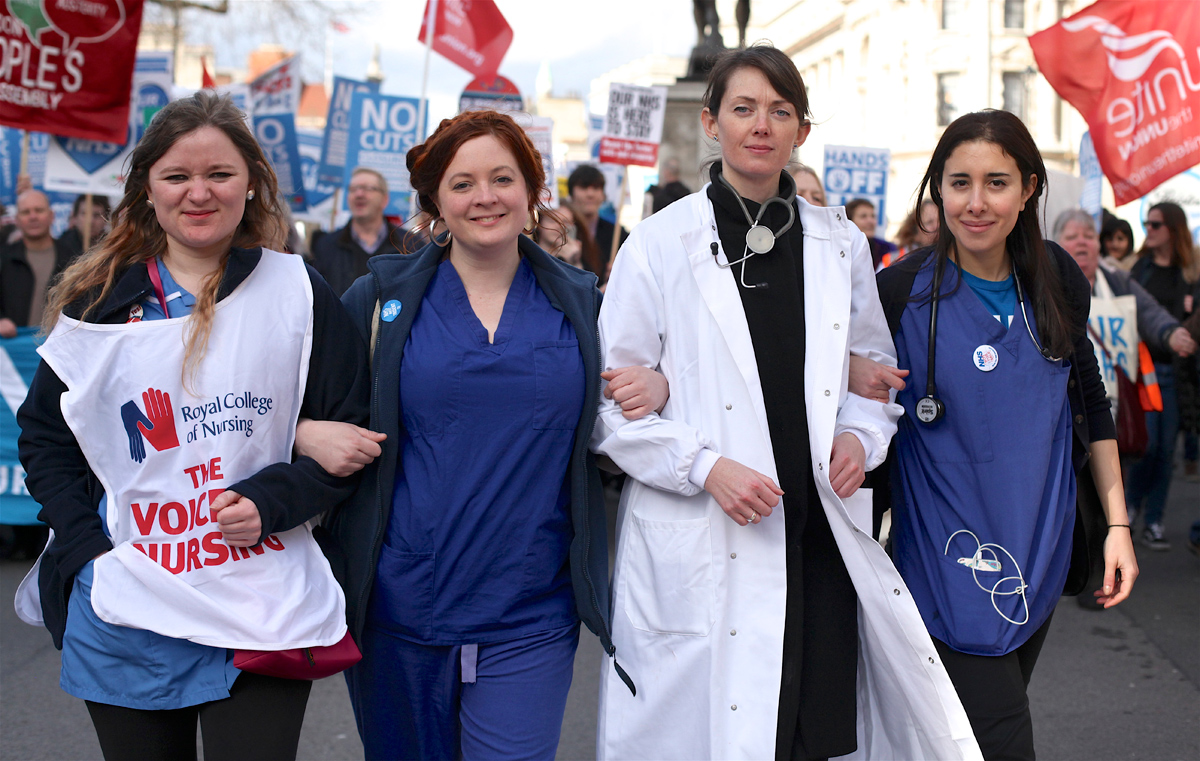 “I’ve been placed in charge of wards without defibrillators”

Nurses and doctors marching to save the NHS, 4.3.17, photo davidmbailey photography   (Click to enlarge: opens in new window)

Kick out all the cutters and private profiteers

There are 40,000 unfilled nursing vacancies across the country.

Experienced nurses are quitting because of the strain and there’s a 6% drop in students taking nursing degrees this September. With fewer nurses training to take their places, the crisis can only intensify.

So thousands of members of nurses’ union RCN converged on parliament on 6 September to protest against the 1% public sector pay cap.

Despite innumerable SOS-calls to successive governments, the nursing profession is in worsening crisis. This is against a background of an NHS in meltdown and society-wide austerity. Since 2010, nurses have seen a 14% real-terms cut in their pay.

If the figures appear bleak, the reality on the wards is bleaker still.

Nurses can seldom provide safe care. Wards are often staffed primarily with agency nurses. As an agency nurse, I have been placed in charge of wards without defibrillators.

The crisis has become so acute that there aren’t enough agency nurses to fill vacant shifts. Wards frequently close because of short staffing.

Working in palliative care, I comfort relatives who cannot be with their dying loved ones because they cannot afford transport or time off work.

Relatives sit at loved ones’ bedsides already worrying about affording their funeral. Patients’ last wishes, to die at home, go unfulfilled because there are no district nurses to take on their care.

The Tory government has shown its weakness and promised to end the pay cap. But lifting the cap – although vital – will not be enough.

The protests are not just about pay. Fundamentally, they are about a profession failing under the weight of a collapsing health service.

Health Secretary Jeremy Hunt and his ilk lie about the severity – at times even the existence – of the crisis. May has been derisive of our plight.

By contrast, Corbyn’s promise of investment to help close the NHS funding gap is a good start. To really solve the problems he’ll also need to kick out the private profiteers and nationalise big pharmaceuticals.

The RCN has promised to ballot for industrial action. Nurses must vote to strike. We need coordinated strikes across trade unions.

Scrap ‘PFI’ privatisation schemes, and bring the whole health service into public ownership under the democratic control and management of workers and service users. To make these changes complete and permanent, healthcare workers and the wider working class must fight for a socialist society.