Link to this page: https://www.socialistparty.org.uk/articles/26148

After Unite the Union members' meetings on all sites and a democratic ballot in the hospitals, cleaners, porters and catering staff in Barts NHS Trust have voted to accept the offer made by private company employer Serco.

24 days of strike action brought the brightest of pickets to the four hospitals in east London involved: Whipps Cross in Waltham Forest, the Royal London and Mile End in Tower Hamlets, and St Barts in the City of London.

The pickets were alive with chanting, singing, dancing, speeches, and numerous visits from trade unionists and socialists from across London and even the world.

We'll remember for a long time parading in a conga round the front of the Royal London hospital, red flags and placards waving in the sunshine, singing 'Solidarity Forever'.

The picket lines were supplemented with rallies and demonstrations, including one addressed by shadow chancellor John McDonnell.

Serco, a billion-pound multinational company, dug in. It's no secret whose side Serco's boss Rupert Soames is on when it comes to exploiting low-paid workers - he is the Eton-educated grandson of Winston Churchill and brother of Tory MP Nicholas Soames!

Profiting from public services is central to Soames's five-year plan to "turnaround" the "troubled" company. This profiteer plans to take no more contracts from the private sector and concentrate instead on sucking the life-blood from services such as the NHS. 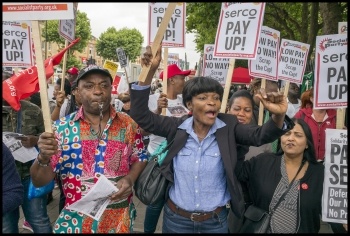 The strike action and this bold plan brought Serco to the table. They realised that their months of distortions, pressure, and use of agency staff were not going to make this campaign buckle.

It isn't what workers were originally demanding, but the stewards and workers have decided to bank it, and prepare for pay talks starting in October on next year's pay.

It is important that the payment is for all permanent employees, including the London Living Wage staff. Serco had wanted to keep these workers separate, but now, crucially, they will be in the same bargaining unit as the rest.

There will also be discussions on workload and pay protection. The stewards and members feel this is a win.

The move to Unite has been vindicated. Until recently the ancillary staff in the trust were divided between three different Unison branches. Porter Len Hockey, a Socialist Party member, was branch secretary of Whipps Cross Unison, and led a fighting branch with battles and victories under its belt.

But increasingly the right-wing led London region of Unison in health blocked action and undermined and attacked the branch leadership. In order to be able to fight at all, and to be able to defend their branch leadership from both management and the union, the porters and domestics at Whipps decided to move over to Unite.

The Socialist Party doesn't take this sort of move lightly. Unison is a big union with over a million members, and huge potential power. It is vital to campaign to change it into a democratic, fighting union. Socialist Party members in Unison have taken a lead in that battle for years and still do.

No union is a panacea in and of itself, and it is vital that workers struggle to maintain democratic control of their own disputes and for a fighting leadership no matter what union they are in.

Tactics have to be flexible - an essential point not understood by the Socialist Workers Party (SWP) whose members in the trust and in the local area attacked Len Hockey for this move.

The move enabled a bold campaign of recruitment of cleaners, porters and catering workers to the union across the trust.

The more experienced Whipps Cross porters have passed on their experience to the newer layers. The union fought for the London Living Wage for the lowest paid and to take workers off zero-hour contracts. Workers were emboldened by their brilliant action to save their tea breaks in April.

Hundreds of workers joined a union for the first time; others left the Unison branch, which was not fighting, in order to join a fightback.

Many of these strikers had only been in the union for a month when the strike action started. They did not know what to expect, but they knew they wanted action.

New leaders emerged. The strike committee was made up largely of workers new to this kind of struggle. Ordinary low-paid workers, many migrant workers, women, subject to all kinds of pressures, have risen up. Many without trade union experience themselves, they have had the vast challenge of leading a fresh, inexperienced workforce across four hospitals spread over eight miles.

They have led the chanting and the protests, they have organised the picket lines. And they have learned: - about organising mass meetings on picket lines, about visiting other workplaces for solidarity, about collecting money, about spreading the news of their dispute. They have also had to take serious decisions in pressured circumstances.

Now they have experience. Now there is a new-found confidence. A team of leaders, bringing together workers from across all the hospitals, is ready for the next round.

As well as pay negotiations for next year, Serco is conducting a review of jobs, terms and conditions in the whole contract, which will likely mean cuts to jobs and pay. 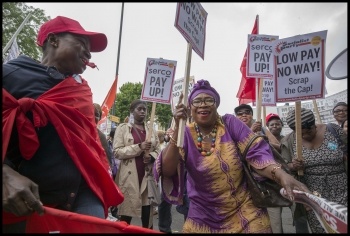 The stewards feel that this dispute augurs well for the next stage. But it could be a tough fight ahead. Serco needs to know that the workforce is not a pushover.

The trust needs to be kept under pressure to intervene. They have given a contract to a greedy company extracting millions in profit from increasing the workload and grinding down low-paid workers.

Serco has used agency staff to try to break the strike. It is disgraceful that the trust has attempted to stand aside.

Councillors have powers to call the trust to account. MPs can exert big pressure on both the trust and Serco.

And Unite must be ready to fight again. As Len Hockey has said at meetings around the trust:

"We must keep ownership of the pay negotiations. We have achieved this through collective action and organisation, and that's what we need for the next battles.

"This inspirational movement of mainly migrant workers is changing, and has changed, how workers view themselves and prospects for changing their conditions in a positive direction.

"Serco had considered that the issue of workers' pay would be settled entirely by the company alone in a one-sided way. They now know better and that an organised workforce has entered into the equation."

"We have raised our heads high. We have achieved something. We have a chance to put our case [in upcoming pay negotiations] and we have hope something will be achieved. If not, we are still strong and we will mobilise our people."