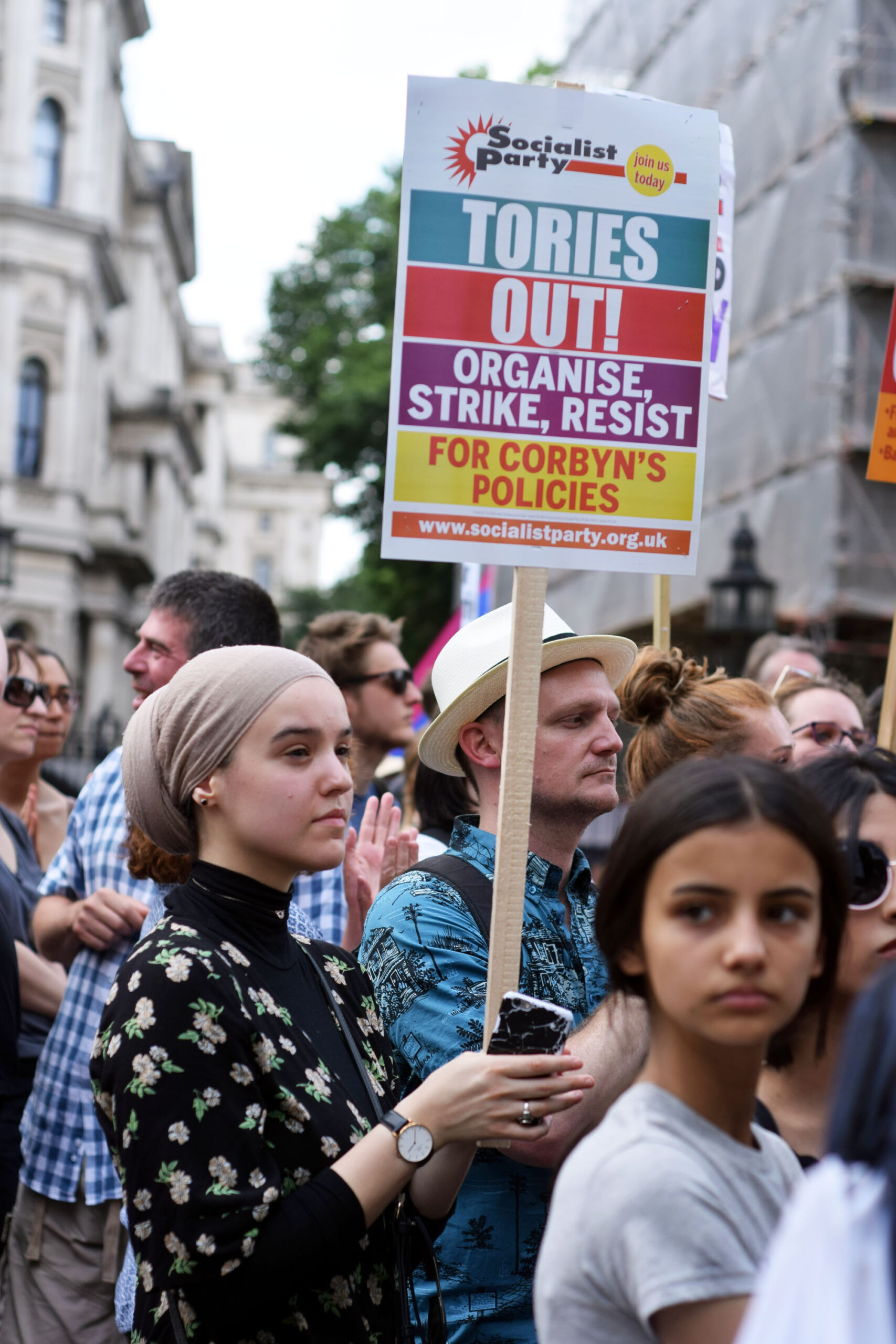 Editorial of the Socialist issue 969 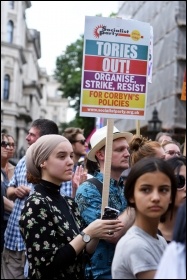 Eight years after Westminster was first engulfed by the expenses scandal a new outrage is threatening to swamp parliament.

The Tory government, already clinging to power by its fingertips, is terrified that further revelations of sexual harassment or abuse by MPs or, worse still, ministers could force them to call byelections or even a general election.

It is not yet clear how far-reaching the allegations of sexual misconduct by MPs will be. They are, however, no surprise. We live in a capitalist society which is based on a small minority – above all the capitalist class, the billionaires who own the major corporations and banks – having power to exploit the majority.

Inevitably in such a society, among those with power will be people who habitually try to use their status to sexually abuse or harass women and men with less power than them, not least their employees.

No-one should be shocked that among MPs who happily made a mint fiddling their expenses, and who have callously presided over savage cuts to public services and the longest period of pay restraint in over a century, there will be some who also use their power and status to sexually harass others.

Countless women workers have had similar experiences at the hands of employers or managers up and down the country.

Women have also been at the sharp end of the consequences of austerity both as users of, and workers for, the public sector.

Nor should reports that the institutions of Westminster have systematically covered up such behaviour for decades (for example parliamentary whips storing up records of misbehaviour, not to report it but to use to make sure MPs voted the ‘right way’) come as a surprise after years of revelations about how different capitalist institutions covered up the crimes of Jimmy Savile.

That is not to suggest that sexual harassment is only perpetrated by those at the top of society. On the contrary, it exists and must be combatted at every level of society.

Over recent decades important gains for women’s rights have been made as a result of struggle, but the oppression of women remains deep-rooted in the structure of society.

Male dominance stems from the existence of a class society based on the private ownership of wealth, science, technique and industry. Therefore to be fully successful, the struggle to end the oppression of women has to be linked to the fight for democratic socialism.

And in order to be able to successfully unite the working class majority in a struggle for socialism it is vital that the workers’ movement actively combats all oppression in society, including putting the fight against sexual harassment and for women’s rights to the fore. 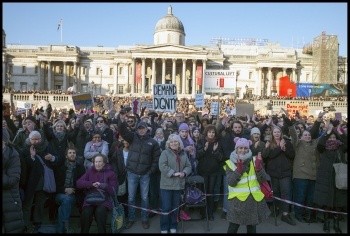 Following the election of Donald Trump millions of women marched around the world in protest, photo Paul Mattsson   (Click to enlarge: opens in new window)

Labour leader Jeremy Corbyn has rightly said MPs must be held to account for sexual abuse and harassment and that a culture of such behaviour has thrived in Westminster for too long.

Any measures would be welcome that make it easier for workers in parliament to report abuse by MPs, and for that abuse to be dealt with.

However, the Labour leadership should not stop there but raise demands for Labour MPs to be held accountable to their local constituencies and for parliament itself to be transformed into a far more democratic institution than it currently is.

The deep-seated anger at the MPs’ expenses scandal is still widespread in society and is likely to be further fuelled by the current revelations regarding MPs’ behaviour.

Labour was in power when the expenses scandal first erupted and had more MPs convicted than other parties.

While at this stage it is the Tories who seem most effected by the current scandal it is highly unlikely that any parliamentary party, including Labour, will be unscathed by it.

Part of Jeremy Corbyn’s appeal is his record of claiming extremely low expenses throughout his time as an MP. He needs, however, to declare that he supports the transformation of Labour into a party where all MPs are held to account for every aspect of their conduct as a political representative, including their voting record.

The reintroduction of mandatory reselection contests for all Labour MPs, so that local constituency Labour Parties can democratically choose who represents them, would be an important first step.

Labour MPs would then feel the hot breath of the membership on their necks, rather than, as has been the case, imagining they have the right to be an MP for life, regardless of their behaviour.

Alongside this Corbyn should argue for Labour MPs, as MPs who supported Militant (now the Socialist Party) did, to only take the average wage of a skilled worker.

Where expenses are needed, they should be strictly necessary ones only – similar to what some building workers and others are paid as they travel the country in pursuit of their work.

Moreover, rather than the MPs checking and auditing their own expenses, why not scrutiny committees made up of workers, the unemployed, those forced onto benefits and small shopkeepers and business people threatened by the next recession?

Alongside fighting to transform the Labour Party into a democratic mass workers’ party, a campaign should be launched to transform parliament itself.

Socialists and the workers’ movement fought for and defend the democratic rights that exist. Our forebears made the greatest sacrifices for the right to vote, a free press, trade union rights and representative systems at local and national level which reflect ‘the will of the people’. But the present parliament is a million miles away from this ideal.

The pioneers for democracy in Britain, the Chartists – the first independent workers’ party in history – demanded annual parliaments.

The election of any representative for five years to an institution like the present parliament is inherently undemocratic. These MPs are not accountable to the constituents who elect them, other than once every five years, and even then their record is never properly put under scrutiny.

Socialists support all democratic rights, including voting for parliament. We would fight along with the mass of working people against a capitalist attempt to overthrow a democratically elected government as happened in Chile in 1973 and Spain in the 1930s, and is taking place now in Catalonia.

But a more representative and accountable system than we have at present is necessary. The House of Lords should be abolished; there should be a single assembly which combines the legislative and executive powers hitherto divided in Britain.

Members should be elected for a maximum of two years with votes at age 16. MPs could then be elected on the basis of democratic local assemblies with the right of recall by their constituents, and should receive the salary of a skilled worker.

Democracy like this would lead to greater participation by the mass of the population, not least working class women who have borne the majority of capitalist austerity.

Of course, no democratic structure can, in and of itself, prevent individuals sexually harassing others, but it could ensure that they were immediately and effectively held to account for doing so.

In addition, the stinking atmosphere of privilege and the right to act with impunity that pervades Westminster would be destroyed by the fresh air of workers’ democracy.

The popularity of Jeremy Corbyn and other similar figures worldwide – like Bernie Sanders in the US – is a reflection of a profound and growing discontent with what capitalism has to offer. Endless wage restraint and growing poverty on the one side and a few at the top drowning in wealth on the other.

Alongside this is increased anger at a truncated democracy which allows unpopular and unaccountable politicians to implement policies against the interests of the majority.

The sexual harassment scandal emerging at Westminster is one symptom of a rotten system. In combatting it the workers’ movement should call for its complete transformation along socialist lines.

Two large rallies and lots of workshop discussions, including ‘Women and the Fightback’.

This version of this article was first posted on the Socialist Party website on 31 October 2017 and may vary slightly from the version subsequently printed in The Socialist.