Link to this page: https://www.socialistparty.org.uk/articles/26379 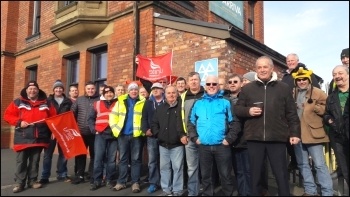 Coordinate the action with rail strike

The bus drivers' strike at Arriva remained completely solid on the third day of action on 30 October. Big turnouts by Unite members on pickets across the region defied the management's increased attempts to encourage scabbing.

The company's real agenda is clear from their new pay 'offer' - it's worth less in April to July next year than a previous offer! The new offer is of £12.04 an hour backdated to April 2017 and £12.10 from January next year, until the deal would expire in July.

This compared to a previous offer of £12.32 from April next year.

A 3% rise and then a levelling up of the lower-paid Greater Manchester and Cheshire areas, to the Merseyside rate, is what Unite wants and can be won.

A Unite member said that Arriva is immensely profitable and that its British operations are sending £26 million a year to Germany.

There is no shortage of cash for higher wages (and lower fares), and further industrial action can force the company to cough up. 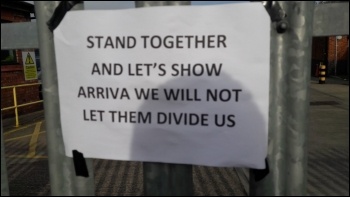 We need the buses restored to public ownership so that profits are no longer siphoned off and stashed away, but reinvested in improving the service.

Understandably some drivers will be looking at the run-up to Christmas, and worrying about the cost of sustained strike action. But so will Arriva! Solid action has already inflicted big losses on the company. Stagecoach backed down in the face of strike action.

Drivers at the Firstbus Manchester garage, also in Unite, are on strike every Monday in November.

Unite has announced further strike action at Arriva, on Mondays through to Christmas. One additional strike day has been added, on 8 November when the RMT rail union strikes on Arriva Rail North and Merseyrail.

Unite and the RMT are both confronting Arriva and coordinated action can strike a serious blow.

Linking the disputes is an obvious tactic. An RMT members' meeting on Merseyside resolved to organise a public lobby of the transport committee to demand they keep guards on Merseyrail.

This is on 7 December, 1-2pm at the Cunard Buildings in Liverpool. Having coordinated industrial action, the two unions should come together to mobilise in force for joint mass action including lobbies and demonstrations to tap into the huge public support.

This version of this article was first posted on the Socialist Party website on 31 October 2017 and may vary slightly from the version subsequently printed in The Socialist.