In the run-up to the government budget, members of civil servants' union PCS have delivered a stinging rejection of the Tories' pay policy, and shown that they are more than willing to take action to overturn it.

"Do you agree that the pay cap should be scrapped; and that funds should be made available to provide you with an above-inflation pay rise?"

And "if the government refuse to scrap the pay cap, are you prepared to take part in industrial action?"

This result shows the depth of anger about Tory (and previous New Labour) pay policy which has seen millions of low-paid members suffer real term pay cuts for many years.

Combined with threats of job losses and office closures it reflects not only the anger of workers but reflects the discontent with the attacks on public services that communities rely on.

It is a credit to the left leadership, the reps and members of PCS for delivering this strong pay ballot result, and in doing so virtually reaching the 50% threshold needed under the Tories' anti-union laws.

"This ballot outcome is a collective result and shows our members and reps united in sending a total rejection of the current pay cap. 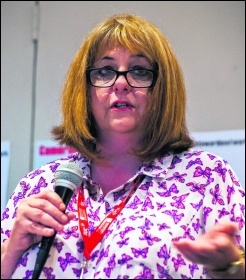 "Over 3,000 new members joined PCS during this ballot showing that when unions boldly campaign on members' issues it gets results.

"We will use these results to put on maximum pressure in the run up to the budget in advance of our national executive meeting in a few weeks.

"I hope it gives confidence to other unions to join with us and plan a serious, united campaign of action to reverse this pay cap and give everyone across the public sector a decent pay rise"