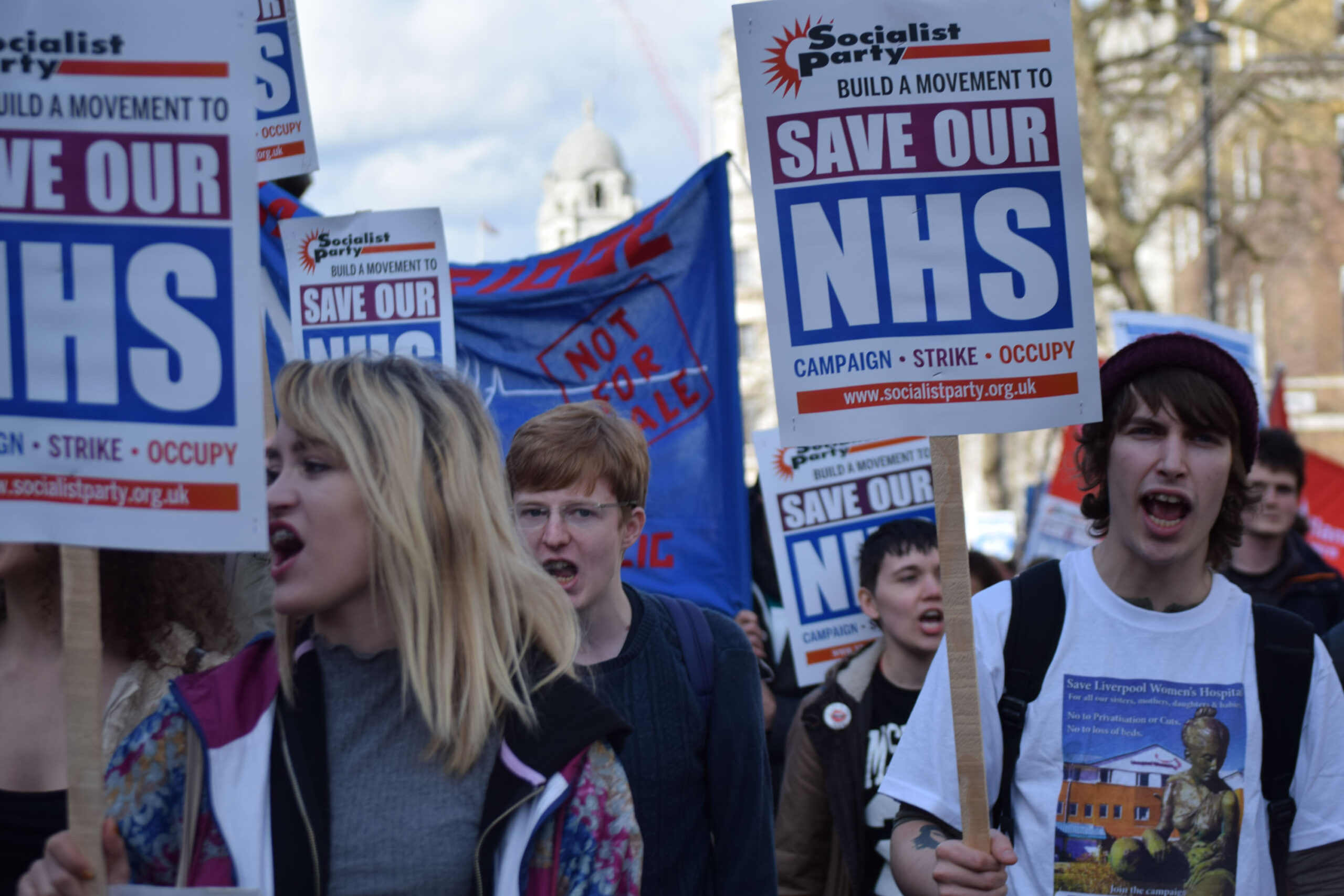 Home Analysis and editorials NHS: use the 3 February protests as a launch pad for a...
Facebook
Twitter
WhatsApp
Email
Print

Editorial of the Socialist issue 980

“If we have made history, so be it. Someone had to make a stand.” These were the words of shop steward Joan Foster to our predecessor paper, Militant, in January 1988. Joan was one of 40 nurses who walked out at North Manchester General hospital in response to an attempt to take away their unsocial hours payment.

Our article about the unofficial strike reported the massive local support that rushed to the impromptu picket line, including firefighters and workers from nearby factories. But the effect went much wider. The walkout detonated a national mass movement against Thatcher’s NHS cuts, which culminated in a TUC demonstration in London that March of in excess of 100,000.

Now, virtually 30 years later to the day, thousands will be marching and protesting in London and across the UK in response to the crisis that has escalated in hospitals over the winter. Of course, the Tories are attempting to blame the increased pressures on the cold weather and Australian Flu. But actually these pretty normal factors have only brought the issues of cuts, understaffing and bed shortages to the surface – or rather to hospital corridors, or even the inside of parked ambulances outside A&Es, waiting for a vacant bed.

The demonstration on 3 February could be very big and Socialist Party members around the country have been working to build the turnout. But given the outrage of ordinary people at the state of the NHS, it could have been gigantic.

The London demonstration was organised at short notice by Health Campaigns Together (HCT) and the People’s Assembly. Activists, including ourselves, have spread the word. But the leaders of the unions and also the Labour leadership of Jeremy Corbyn and John McDonnell should have put themselves at the head of the march from the start. We called on them to organise for Labour and the unions to pay for trains and buses from every area and to take out paid adverts in daily newspapers.

Unfortunately, even when addressing a Labour Party rally on the NHS in Westminster nine days before, Corbyn didn’t mention the demonstration. There is a real danger that the leaders of Labour and the unions leave the struggle against this weak and divided Tory government to merely waiting for it to implode.

Last March, on the proposal of Socialist Party members in HCT, a demonstration was organised against the planned £22 billion Tory health cuts contained in their sustainability and transformation plans (STPs) and well over 100,000 were mobilised.

The capitalist establishment is extremely wary of a Jeremy Corbyn-led Labour government because of the expectation it can arouse among working class people. This fear was reflected in the capitalist media’s response to the Carillion scandal. In its editorial ‘Carillion’s failure does not vindicate Corbyn,’ the Financial Times voiced the venom of big business against any threat to the neoliberal privatisation agenda of the last three decades or more that was started by Thatcher and then continued under New Labour’s Blair and Brown.

This is a harbinger of the relentless pressure the capitalist class and its media will attempt to exert on a Corbyn administration. But the working class will be in the strongest position to resist such attacks on a left programme if the Tories are pushed out of office as a result of a mass movement.

Such a movement can be built now. 3 February must be the beginning, not the end. It can tap into the huge anger that has built up after a lost decade of workers’ living standards and seven years of Tory austerity. The Corbyn surge in the general election as a result of radical policies such as public ownership, abolition of tuition fees and a £10 an hour minimum wage, is itself a reflection of the mood that exists.

The fall of Carillion has further exposed and discredited the parasitic privatisation that is rife in the NHS and across the public services and ratcheted up the anger even more.

After 3 February, the TUC, unions and the Labour leadership have to meet urgently. They should set the date for a Saturday London demonstration. The planned TUC one in May should be brought forward. It must bring together the defence of the NHS with the fight for a decent pay rise.

The civil servants’ union PCS has the mandate for a strike ballot on pay after its consultation ballot last autumn. Both Unite and Unison are now recommending rejection of the Tory pay offer in local government. Lecturers’ union UCU is starting strike action next month to defend the pensions of university lecturers. The waves of strike action at local and sector level over the last six to nine months show the preparedness of workers to act if a lead is given.

Over the last few years, we have already seen different groups of health workers take action, from midwives to radiographers, to junior doctors – some for the first time in decades, others for the first time in their history. Last summer, even the traditionally non-strike union the Royal College of Nurses organised protests and a consultative ballot over pay.

Back in 1988, on the front page of our paper for the 4 March TUC demo, we carried an article by the late John Macreadie, Militant supporter and CPSA (now PCS) deputy general secretary. He was also on the TUC general council and unapologetically used that position as a platform to put pressure on the other union leaders and to appeal for action. He wrote: “At the last TUC general council meeting, I asked ‘what next?’ The Tories could ride out one demonstration… I urged that it [the demo] should be used to launch a one-day general strike.”

The demonstration on 3 February in London and national day of action has to be the platform for a mass movement that can inflict a terminal defeat on the Tories.