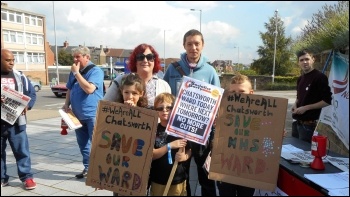 The Chatsworth rehabilitation unit at Mansfield Community Hospital in Nottinghamshire has been saved from closure by an excellent campaign - proving once more that if we fight, we can win.

The ward treats patients with long-term neurological conditions in Mansfield, Ashfield and Newark. As staff we knew the closure would be a devastating blow if our patients had to travel further afield for their care.

Our hospitals trust announced last July that Chatsworth ward was to close at the end of that October. They came to the ward with representatives of our union, Unison, to tell staff not to worry - we would be found other jobs within the trust. The NHS currently has 40,000 nursing vacancies.

It was made clear this was a done deal and there was nothing we could do about it because no-one would lose their jobs. However, the staff demanded: "What will happen to our patients with long-term conditions? Where will they go?

"Will they have to travel miles away for their care? How will their loved ones be able to visit them on a daily basis?"

There were no answers. Neither the trust nor the clinical commissioning group (CCG) could answer these vital questions.

So instead of passively accepting closure, the brave staff - with full support from the Socialist Party, and at that time no one else - built a movement including patients, ex-patients and their families.

We quickly formed a committee and launched the slogan #WeAreAllChatsworth. We wanted to send the message that if they closed us, other NHS workplaces would be next.

Mobilising the workforce can sometimes be tricky due to fear and management intimidation. The Socialist Party helped lead the campaign from the start, including showing campaigners how to make use of the media. It wasn't long before the BBC came and filmed our public meeting.

A key moment came when the CCG asked #WeAreAllChatsworth to meet with them and trust representatives. We agreed - if the meeting took place on the ward.

We explained that current patients would like to attend, and indeed one bedbound patient was wheeled into the meeting on her bed, from which she asked searching questions that management didn't answer!

Jon Dale, secretary of the local health workers' branch of the Unite union and a Socialist Party member, chaired the meeting. He warned the trust and CCG: "If any staff who are part of this campaign on behalf of their patients are disciplined in any way, what is currently a local issue will become a national issue."

The committee met regularly and elected officers. We opened a bank account, produced a banner and t-shirts, and started to build for a march in September. The ward stayed open past the original closure date.

As thousands signed the Socialist Party petition in town, including many health workers, the wider workforce started to feel bolder in offering messages of support, including some union reps who had been hesitant at first.

Under pressure from below, Unison gave official backing to the campaign, as did the Royal College of Nursing. Jeremy Corbyn also spoke in support. The campaign continued to receive messages of support from around the globe.

The staff stayed strong, and even under the stress of insecurity only three found other jobs. In similar cases staff have understandably voted with their feet and sought employment elsewhere, making the closure a fait accompli.

There were several public consultation meetings called by the CCG and every time there was standing room only. The march and rally were hugely successful with massive support from the public.

On 12 February the trust and CCG called a meeting at the hospital, packed with staff once again. Management announced to poker-faced workers that the ward would stay open.

The Chatsworth staff are a family like no other. Their courage in standing up for what they believe in is inspirational.

We will now be working closely with the trust and the CCG to develop the service to include reaching into the community. Also, ex-patients are very keen to restart the self-help organisation that closed a few years ago.

Patients with long-term neurological conditions can now feel secure in the knowledge they can access care at the right time, in the right place.

#WeAreAllChatsworth has won this battle. This shows again that with bold leadership and organising, NHS workers and patients can stop the cuts.

Now let's take the campaign national. The health unions must build for action to save the NHS from the vile clutches of the capitalists and privateers.